Mattis: U.S. looking for “the way forward” with China in light of the upsurge in tensions over sanctions

WASHINGTON, September 25. /TASS/ — the head of the Pentagon has noted that opinions about the necessity of establishing relations with China and adheres to the Secretary of state Michael Pompeo. 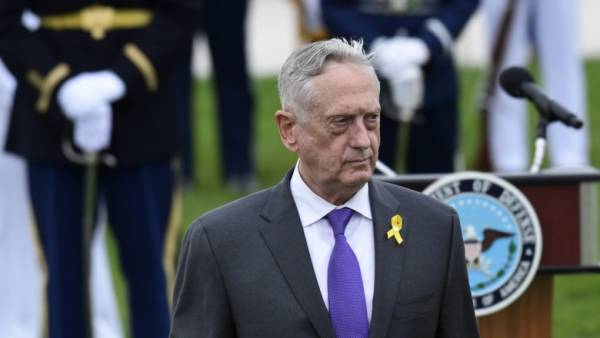 The US is trying to find a “way forward” in relations with China, to overcome a new surge of tensions in bilateral relations, caused by Washington’s use of sanctions against Beijing. This was stated to journalists by the Minister of defence of the USA James Mattis.

We believe that we do need to maintain relations with China. The Secretary of state [Secretary Michael] Pompeo and I share the same opinion on this matter. So we are currently looking for a way forward.James Multiministry of defense

In turn, the employee of the press service of the Pentagon, the American army Colonel David Eastburn confirmed that Beijing had notified Washington about the cancellation of planned meeting of the two military commanders of China and the United States. These negotiations were to hold that the commander of the Navy of the people’s liberation army of China Shen cinelan and his American counterpart the chief of naval staff Admiral John Richardson. “Additional information [on this subject] we do not have,” said Eastburn.

On Thursday, the US administration imposed sanctions against weapons office of the joint staff of the Central military Commission of the PRC and its head is Whether Sanfu for the acquisition of Beijing from Moscow su-35 and anti-aircraft missile systems s-400.

China in response, expressed the United States strong protest. The Chinese defense Ministry stressed that “such actions can be seen as a blatant manifestation of the hegemony of the American side”, stated that military – technical cooperation between Moscow and Beijing did not violate international law and demanded to “immediately correct the mistake”, that is, to lift the sanctions, threatening otherwise consequences.

For its part, the foreign Ministry announced the cancellation of China’s participation in the joint with the US events.

Beijing, in particular, refused to participate in the Symposium in the US on international security issues at sea. In addition, it was announced about the cancellation of another meeting of warlords from 25 to 27 September was to be held in the capital of China.