All of Syria will hide behind s-300

Russia has found an adequate response to the death of the crew of the Il-20. 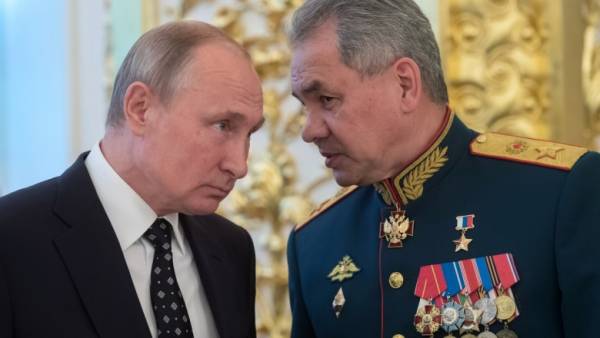 On Monday, the Russian defense Minister Sergei Shoigu announced the measures to be taken in connection with the catastrophe in Syria reconnaissance aircraft Il-20M, which occurred, according to the Russian military, by the Israeli air force (the evening of 24 September, they submitted additional evidence).

In addition to the transfer of the Damascus anti-aircraft missile system (ADMS) C-300 (“Kommersant” reported earlier) in Syrian command posts of formations of air defense will put the Russian automated control systems which will be monitoring the situation and issuing of target designation.

Israeli Prime Minister Benjamin Netanyahu discussed these steps with Vladimir Putin, but the Russian President, as stated in the Kremlin, called the decisions adequate.

Readiness to deliver to Syria the s-300 Sergei Shoigu said in a special address, which was broadcasted in the TV channel “Russia-24”. Referring to the instructions of President Vladimir Putin, he said that SAM able to intercept the means of air attack at a distance of over 250 km and hit several targets will be Syrian armed forces within two weeks.

To provide centralized management of all forces and means of air defense of Syria, monitoring the traffic situation and operational targeting Syrian command posts of formations and military units of air defense forces will be equipped with automated control systems. It is, as the Minister said, will ensure “the identification of all Russian aircraft of the Syrian air defenses”.

In addition, the adjoining areas of Syria over the Mediterranean sea will be applied to electronic jamming satellite navigation, airborne radar and communication systems of military aircraft of foreign countries, attacking objects on Syrian territory.

We are convinced that implementation of these measures will cool hot heads and keep them from rash acts that threaten our military. Otherwise we will be forced to react in accordance with the prevailing situation.Sergei Kogumikust of defense

Identified actions are directly connected with PE, which occurred September 17, with reconnaissance aircraft Il-20M in the Mediterranean sea. When he monitored the situation in Idlib province, four Israeli F-16 strikes on facilities in the province of Latakia. According to the Russian experts, representatives of the Israeli air force for one minute before the start of the strikes came on the hot line on command of the Russian forces, without notifying on the location coordinates to their aircraft, but calling the target of its aircraft facilities in the North of Syria. However, according to representatives of the defense Ministry, punches in the end were deposited on the West of the country. Russian military directly accused the pilot of one F-16 that he is waiting for the return fire of the Syrian air defense, “refuge” for the Il-20M for anti-aircraft missile fired from complex-200Э, identified the Russian side as a priority goal.

On the evening of 24 September, the defense Ministry again rejected the version of the Israeli military about their involvement in the crash of a Russian reconnaissance aircraft, calling it “timid declarations”. The official representative of the defense Ministry major General Igor Konashenkov has introduced a new presentation of data with indicators of combat control of the Russian s-400 system on the base Hamim, which recorded the actions of the Israeli fighters and Syrian rocket complex With-200. According to the Agency, as of 22:01:17 three Israeli aircraft took zone duty in the air at heights of from seven and above kilometers.

An Israeli plane with the mark at the time of the tragedy was at the height of from nine to 10 km on a single azimuth from the Russian Il-20. Was recorded flight of a rocket complex With-200 to an Israeli F-16 flight altitude of the rocket With-200 was above both the Israeli and below it the Russian plane.

The General added that s-400 “saw” as “rockets approaching Israeli aircraft dramatically changed the direction of flight and went on the Il-20”.

Rocket, the General said, was in a Il-20 in 22 hours 02 minutes 45 seconds. “Israeli F-16 shelter from the missiles for the Russian Il-20 stayed in the patrol area West of the Syrian coast,” — said Igor Konashenkov.

The issue of supplying Syria s-300 has always been extremely sensitive for Israel: there is believed that, having received these complexes, the Syrian military will be able to monitor Israeli air space.

In 2013, Russian authorities had to agree, so the previously signed contract was canceled, and the down payment (about $400 million) was returned to the customer.

Subsequently, the remaining degrees of freedom for s-300PMU-2 in the amount of four divisions were used to implement the Iranian contract (deliveries completed in 2017). The theme of deliveries of s-300 to Syria has reappeared on the agenda in April 2018, when the forces of the Western coalition headed by the USA launched a massive missile attacks on targets Syrian infrastructure. Even then, the question that lies primarily in the political arena, was virtually decided, but emergency deliveries of s-300 followed. According to the information of Kommersant’s sources, the delay was associated with unwillingness to put up all the potential complex responses: “Among the Russian contingent were no losses. And supplying s-300 to Syria in this context would only escalate the situation in the region.”

But now the situation is fundamentally different, says one of the interlocutors “Kommersant”: 15 Russian officers were killed because of the actions of the Israeli military and “without reply to leave this situation is simply impossible”.

According to unofficial data, in the next two weeks to Syria from Russia will be delivered two regimental sets of s-300, which in coordination with the Syrian side will cover objects on the coast of Syria and to control borders with Israel, Jordan, Lebanon and Iraq. The source “b” familiar with the situation said that the number of divisions may change depending on the situation: “Deliveries will begin from two to four, and then, if necessary, this number can be increased to six to eight”.

Retired Colonel Viktor murakhovski sure in two weeks it is really time to close the airspace of the coastline of Syria, provided if you take the s-300 from the presence of the defense Ministry: “standing in our Arsenal, gradually changing to s-400 and leave in storage, which they can very quickly move to the Arab Republic of”. Former Deputy commander of the air force of the Russian Federation on joint air defense system of CIS ITech Bijev emphasizes that the creation of a layered air defense system in Syria will completely close the airspace, “not only from Israel but from Lebanon”.

Scrolling response, Sergei Shoigu said that before the breach of contract for the supply of s-300 Syrian soldiers managed to pass the relevant courses.

However, relying solely on level of training the Syrian military in the defense Ministry do not intend to.

That is why the Syrian command posts of formations and military units of air defense forces will be equipped with automated control systems (develop, the EBA concern “Almaz-Antey”). How to tell military, this step will allow you to combine information from all radar stations of air defense systems (such as “Armor”, “Wasp”, “Buk-M2E”, “Square” and C-125). This centralization is designed to eliminate even the theoretical possibility of the destruction of the Russian air assets, said one of the interlocutors “b”: “combat aircraft of other countries is an occasion to reflect”. To control the coast of Syria, according to him, will involve electronic warfare type “Krasuha”, which in 2015 are “very successful” alert on the base Hamim.

In the evening, the Kremlin said that at the initiative of the Israeli side was a regular conversation between Vladimir Putin and Benjamin Netanyahu, during which the Russian leader said that the decisions “adequate to the situation”. In turn, the press service of the Israeli Prime Minister Benjamin Netanyahu said: “the Transfer of advanced weapons in irresponsible hands will increase the risks in the region.” He also promised that Israel “will continue to defend its security and interests.” However, he noted that the conversation was agreed to continue the dialogue of experts and coordination between the military of the two countries.

Any statements that the delivery of s-300 will not complicate relations with Israel, divorced from reality, for us it is a serious threat.

In his opinion, together with the s-300 Syrians will be given carte Blanche to shoot down Israeli planes. They will also be able to control the airspace up to the Israeli international airport Ben Gurion. “And this is a potential threat not just to military aircraft but also civil,” — said the source. He added that under the guise of the “Russian umbrella” Iran inevitably activates the smuggling of weapons to Syria and Lebanon, and Israel will not be able to leave it without an answer. At the same time, he noted that in Israel many years worked out a system of counter the s-300.

It’s not a system that is completely impenetrable for the Israeli air force. But the fact of the delivery of the threat. Andrew Casinosroulette military expert

Commented on the actions of Russia and Advisor to the President for national security John Bolton, who called the delivery of s-300 “big mistake.” And the Secretary of state Michael Pompeo promised to discuss this issue with Russian foreign Minister Sergei Lavrov on the sidelines of the 73rd session of the UN General Assembly which opened in new York.