Shades of the second round

How and why the losing candidates in the Khabarovsk Krai and Vladimir oblast. 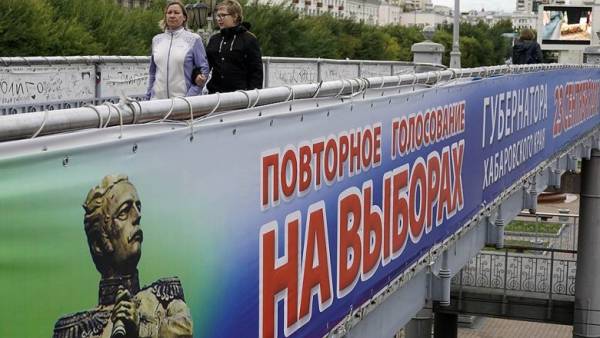 In the Khabarovsk region Vladimir region and second rounds of gubernatorial elections with a wide margin won by candidates from the liberal democratic party who are not going to win. The Deputy of the state Duma Sergey Furgal in Khabarovsk scored 76% of the vote — more than many candidates from the ruling party in the elections on 9 September. Mr Sipiagin from Vladimir received 57%. The staffs of the heads of regions tried before the second round to work on the mistakes, but the results were disappointing.

The winner of the gubernatorial elections in the Vladimir region, the head of the LDPR faction in the legislative Assembly Mr Sipiagin personal fame is not possessed: he passed in the legislative Assembly on partspiskov, which was headed by Vladimir Zhirinovsky. On the other hand Mr. Sipyagin was not connected and special arrangements. In the first round he lost some of the Governor Svetlana Orlova and the second surpassed it by 20%.

“the Main thing is honesty and legitimacy”: the EP yielded two of the region

The source “b” in the region believes that the reason for this vote for Vladimir Sipyagin began to protest, the negativity towards Svetlana Orlova and the pension reform, initiated by the Federal authorities. “Voters can see who you vote for, and don’t want to see Orlov on the post of Governor — objection by the Deputy of the state Duma Alexander Kurdyumov (LDPR).— They could not come to the polls if I didn’t want to vote, if he were a candidate technology, he wanted to show including the Communists”. According to the Deputy, candidate of the liberal democratic party “voted the entire Vladimir and GUS (the automated system “Elections”) were frozen.” Another source of Kommersant, close to the regional administration, says that during the campaign failed to restore collapsed the power structure in the region. Earlier, the interlocutors “Kommersant” said the curator of the internal political unit in the regional administration for a long period may not have gathered the heads of municipalities, and worked with them “in the decision-making procedure”.

In Khabarovsk region the situation is different. Technologist, worked at the headquarters of the Governor Vyacheslav Shport in the second round, believes that originally to coordinate the nomination for Governor Furgala was a big mistake: “His name is known to all, this is a good start for victory.” “We had him! Yourself! District Furgala (in the Duma elections.— “B”) consisted of Khabarovsk, and that almost half of the population of the region. In 2016, the United Russia election campaigning generally were not, and Furgal spun at full. This year, we had collected signatures to pass the filter (in the elections of.— “Kommersant”)”, — says a senior regional official. The Deputy of the state Duma from LDPR, however, to fight in the first round for the victory had not intended: meetings never spent, creativity in campaigning is not distinguished.

Image of Vyacheslav Shport has started to adjust before the second round. A long time ex-Governor has held management positions at the plant Dry in Komsomolsk-on-Amur. In Khabarovsk it is not his considered and compared with the former head of the region Viktor Ishayev and Khabarovsk mayor Alexander Sokolov — not in favor of Mr. Shport. “Vyacheslav Ivanovitch showed himself! Ishaev was hard and even cruel leader, but in this city all revolved. Shport — the defense industry, it in business is not very understanding” — lamented in an interview with “Kommersant” the businessman Gennady. The Governor also blamed the attention to the native Komsomolsk-on-Amur, the development of which was billions of rubles, — it was thought that damage to Khabarovsk and other municipalities. Also, the Governor was accused that he pays much attention to the economy and the social sphere remains in the pen.

At the meetings before the second round of the problematic issues Vyacheslav Shport began to speak. About Komsomolsk the Governor also said. He explained that the funds for the development of the city now allocates Federation, and the regional authorities got the opportunity to allocate more money to Khabarovsk and other cities and areas. At the same time completely away from the image of the defense industry economist Vyacheslav Shport could not: he spoke about the success of the orders, although the audience was eager to ask him questions about broken elevators and workplaces for people with disabilities.

Local officials in conversation with “Kommersant” the problem with the campaign of the Governor, his image and popularity were acknowledged, but the main reason for poor results Vyacheslav Shport called pension reform.

“The campaign would be held as usual, but there is the increase of age, went wave of protest” — in this spirit expressed by several regional officials and a Federal parliamentarian.

To ensure the victory of Vyacheslav Shport tried another way. Voters showed videos in which the Governor invites the competitor to work the first Deputy, and he agrees. In social networks began to criticize Furgala for compromise. Kommersant’s source in the headquarters of Mr. Shport assures that the arrangements a candidate from the liberal democratic party had to act “as friendly”. However, Sergei Furgal, issued a statement that no proposals have been accepted and will participate in the second round. The next day there’s a new movie — the Governor and his competitor peacefully walking along the waterfront, talking about the Affairs in the region and shake hands. The story caused the opposite effect. One of the municipal deputies from the liberal democratic party was then assured “Kommersant” that many party members after such action of the leader of the Department are set to leave the party. “Let’s see how he will behave, but the vote is still going in spite of, Furgala,” said he, claiming that the same mood and electors.

High-ranking regional official in the middle of the week, told Kommersant that Sergei Furgal “is playing a double game and that it adorns”. “He went on agreement with the administration, do not hold meetings with voters in the first nor in the second rounds. But to completely abandon the fight no more. We have people active in social networks, messengers began to spread the message that it is time to change the power, did the staff Furgala,” he notes. According to the official, Sergei Furgal realized that can win, “and held it above agreements, although they became a candidate.”