“I am a supporter of regional egoism”

The new Governor of Khabarovsk Sergey Furgal has made the first statements. 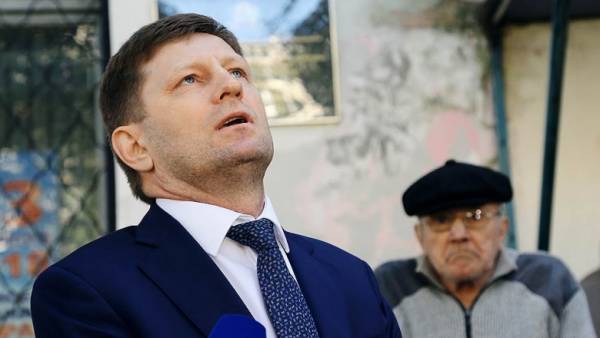 Victorious in the second round of elections of the Governor of Khabarovsk territory the promoted worker of LDPR Sergey Furgal has announced a change in the region. In the next two weeks the new government is formed in the region that is expected to focus on the recovery of the industry, innovative approaches in working with the business, fundamental changes in the social sphere. The inauguration ceremony of Sergey Furgala office will be held next week.

As Chairman of krajizbirkoma Gennady Namesnow, after processing 100% ballots, the Deputy of the state Duma from LDPR Sergey Furgal has won the second round of elections with a score of 69.6% of the votes. The former head of the regional United Russia Vyacheslav Shport — 27,97%.

The turnout was 47% vs 36,09% in the first round. The winner within five days is obliged to write the application for abdication of the Deputy of the state Duma, said Mr. Namesnow.

The head of krajizbirkoma said that many allegations of violations were withdrawn, including a statement of stuffing at polling station No. 124, recorded by an observer from the liberal democratic party. Arriving in Khabarovsk, the Secretary of the Central election Commission (CEC) Maya Grishina told about the “lack of alarm”. Additional elections to the state Duma in single-mandate district No. 70, in which elected Mr. Furgal, will be held in September 2019, she said. Mister Furgal has declared that he will support the candidate who knows. Lost the election Vyacheslav Shport has declared that it accepts the voters ‘ choice, and wished Sergei Furgal fruitful work for the benefit of the region. About the plans of Mr. Shport not yet known.

Sergey Furgal at a press conference said that the region will change. “There will be changes, they are inevitable. Because you need to understand that with a turnout of almost 50% and this turnout is very high for the Khabarovsk territory for the election of such level, and nearly 70% of the votes is a huge result. I understand the level of responsibility that falls on the head of the region. I urge the legislative and Executive authorities to put aside misunderstandings, deficiencies,” said the new Governor. According to him, it is necessary to quickly determine the “economic, political and social” the starting point of the region and move on. Sergey Furgal has admitted that “today doesn’t really know where we are”: “what is not a very good situation in the province, I understand, is objective, otherwise people would not vote.”