Bermuda monster: scientists have uncovered the mystery of beached beasts

MOSCOW, September 23 — RIA Novosti, Tatiana Pichugina. During storms worldwide makes on the shore dozens of dead marine animals, sometimes very strange. Due to corruption, lack of tissues, bones they are often unable to identify even the experts, and human imagination creates the mysterious creature still eludes our eyes.

“The monster”, “It’s covered with hair”, “Looks alive” — that’s the first reaction of witnesses. In the collection RIA Novosti — the most mysterious monsters, tossed ocean.

In July 2003, on the shore of Chile made a huge formless organic mass that is spread on the ground.

The world media headlines trumpeted: “the Chilean globster put scientists in a deadlock”. 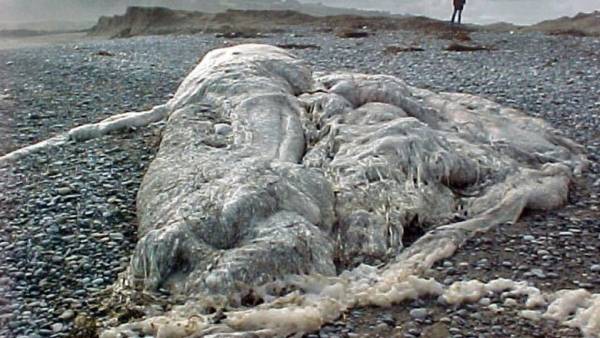 Glossterm called unidentified carcass washed up by the sea. In the old days, before the development of genetic methods, it was difficult to determine the species of animal, so globster was a source of inspiration for the cryptozoology enthusiasts-lovers looking for unknown creatures like the Bigfoot and tortured by the us military aliens.

Chilean globster luck. It was visited by the staff of the local center for the study of marine mammals and visually determined that it is probably the skeleton of a whale.

Then scientists from the U.S. and New Zealand under the leadership of Sidney Pierce took a sample of organic matter from the carcass and conducted histological analysis. Using polymerasechain reaction, recovered DNA. The results showed that it is definitely a tissue of the sperm whale, and not, for example, squid.

A few years earlier, pierce was famous for having solved two mysteries at once — “Bermuda BLOB”, found in 1988, and “St. Augustine monster” that washed up on the beach of Florida in 1896.