Nauseating food, which some consider a true delicacy

The taste and color of comrades there. As well as the smell and texture. In many countries there are local delicacies that, at best, disgust and nausea the rest of the world.

The taste and color of comrades there. As well as the smell and texture. In many countries there are local delicacies that, at best, disgust and nausea the rest of the world.

Often, very often, is something rotten. Roll up your eyes when you think about it, because, in the end, the cheese is a product of the putrefaction of milk, wine grapes, and beer — barley.

In General, researchers say that allegedly the more eating-maggots — the food, past the fermentation process, the better for your health, as it dramatically improves the microbiome (microflora) in your intestines.

But still, some foods and dishes an outsider seem to be the literal embodiment of a particularly sophisticated nightmare.

There should immediately be noted that scientists and food producers share the processes of fermentation, of fermentation and putrefaction is not complete synonyms. But all these processes involve the decomposition of proteins. For a common man, not related to the laboratories and the production of delicacies, it just feels like something rotting. Sometimes a very good rotting.

In this article, the word “rot” or “decay” to describe all of these — generally similar — processes. It’s not exactly scientific. But fully reflects the feelings of a man for the first time in my life faced with these supposedly edible works.

Here are a few examples of the delicacies, after reading which, you will long to Wake up in a cold sweat.

Of course, all assessment statements in this text only reflects the taste preferences of the author and anyone else — do not pretend to be an unbiased assessment of those or other dishes.

Almost all of these delicacies I have tried. The first and last time in my life.

There is nothing more amazing than cheese from Sardinia under the name “KAFU the Martz”. This cheese is so unusual that according to European rules of hygiene and health protection of the population to produce its prohibited.

But the ban, as we know from the history of mankind, only excite the interest and appetite. In Sardinia immediately after europapreis a black market Cass to Martz, and hipsters throughout Europe pay good money to get this delicacy.

So what’s the problem, you ask. To create the CAS, the mn is not so difficult, but how to eat this cheese — a separate issue.

Cheese KAFU the Martz from Sardinia should have when it jump the larvae.

Does Pecorino cheese, and leave it in a dry and quiet place so it started to rot. It get the cheese flies, and leave their larvae. Larvae (also known as cheese worms) thrive there, and because of their digestive activities of the cheese starts to separate a liquid, which people in the know call tears.

That was then, when the cheese starts to stream, and it should have.

But it’s not a simple procedure. The larvae of cheese flies are distinguished by two features — they are timid, and when they are scared for their lives, they are still Jumpy. They can jump 15 centimeters.

So, the Casa Martz is placed on the table. Eater takes in one hand a knife to cut yourself a tasty morsel, and the other hand covering the face, to leaping larvae are not caught in the nose or eyes.

Those who do not like to eat jumping larvae, can put the cheese in a paper bag and tightly wrap it. The larvae will notice the lack of oxygen and again starts to jump. After the package will stop their rustling, cheese can be eaten. This time with a dead cheese worms.

When it comes to the rot of human ingenuity has no limits. Let’s say you live in Iceland, in some distant century. Food in the country a little, but in coastal waters full of Greenland sharks. Well, I’ll tell you what the problem is to catch and eat! 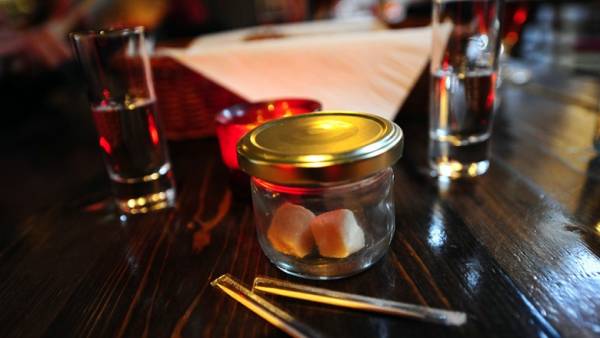 It is not so simple. Meat of the Greenland shark to humans is deadly because it is saturated with urea. Icelanders did not stop. Sharks are caught, gutted and cut their heads off. The rest of the body buried in the sand on top and pressed down with stones, so that all the juices from the carcass emerged.

Rot this shark a few months. There comes a time when even the seagulls wouldn’t touch the meat. Here the shark is dug up, cut into pieces and the pieces hang for a few months in the shed, that they have thoroughly rotted.

Then it is possible to eat.

If you have neither the time nor the energy to dig in and dig out the shark and encourage it to rot, go to any Icelandic supermarket and buy this thing called awkardly.