Political violence in Russia is growing every year

From September 2014 to September 2018, fixed 209 attacks on civil society activists, politicians and journalists, the report says International human rights group “Agora”. The most dangerous regions for civic engagement, according to the monitoring data were Moscow (52 cases), Saint Petersburg (23) and Krasnodar Krai (15). 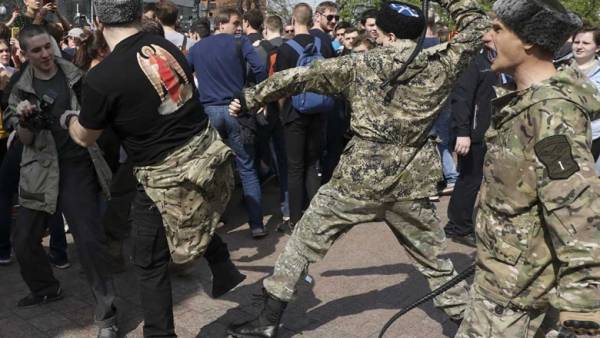 At least five cases of violence recorded in Voronezh, Nizhny Novgorod, Novosibirsk, Chelyabinsk, Sverdlovsk, Kemerovo oblasts and Stavropol Krai. The number of attacks and threats is growing every year: in 2015 was 21 this fact, and in 2016 — 35 2017 — 77, and in less than 2018 — more than 80 (including beatings of participants of mass protests in several Russian cities).

Violence against activists has become the norm, the legitimacy of the attacks give the statements of individual politicians and officials, the report said. Informal groups like the Cossacks, SERB NOD and fade into the background after the protest Alexei Navalny may 5: this may indicate that authorities felt more confident, giving law enforcement authorities additional powers to use violence, “perhaps giving a conditional command everyone else to calm down and not to interfere under threat of punishment.”

While activists who have experienced violence often become defendants in administrative or criminal cases.

In many cases, the increase in violence is an inadequate response to the activity of Navalny, says the analyst of “Agora” Dmitry Kolbasin: “Of the 209 analyzed facts 80 is linked to attacks on supporters of Navalny himself.” In the regions included in the top ten, more developed civic engagement, respectively, where she is and the maximum resistance, he explains: “So, Krasnodar region was never considered a quiet region for activists and human rights defenders, which proves the brutal beating of a member of the “Ekovahty on North Caucasus” Andrew Rudomakha and causing violence lawyer Michael Beniash. Chelyabinsk oblast was in the top ten, because there are a lot of attacks on Navalny supporters, including public actions”.

The main triggers for the attacks were the events in Ukraine, elections and the regional agenda. Activists threatened with words, paint the car and apartment doors, shooting at the Windows, burn cars and houses.

Law enforcement agencies respond to reports of abuse in different ways- from a complete lack of review and “no statements to the police did not arrive” to prompt disclosure of things.

The interior Ministry on the request of “Vedomosti” on Thursday did not answer. The leader of the NOD — state Duma Deputy Yevgeny Fyodorov says it’s against his associates in Pushkin square on 5 may was to use violence: “We cut St. George’s ribbon, which we stretched. Our activists are fighting for the independence of the Fatherland, being exposed to violence in the streets from the Pro-American forces”.

If earlier police officers are somehow punished, now they have a green light on the violent actions and they feel their impunity, said a member of the Central Council of the unregistered party of Navalny “Russia’s future” Nikolay Lyaskin: “Last year’s campaign, Navalny and his actions are now greatly concerned about the power, she fears him and has ordered law enforcement agencies to conduct arrests and committing violent acts. And to actions of law-enforcement structures are adjacent and close to the government organization.”