Haley: trump from the podium of the UN General Assembly will explain who are willing to help US

UN, September 21. /TASS/. The President of the United States Donald trump during a speech during the General discussion at the 73rd General Assembly of the UN will understand that Washington will help only those States which are willing to cooperate where shared American values. 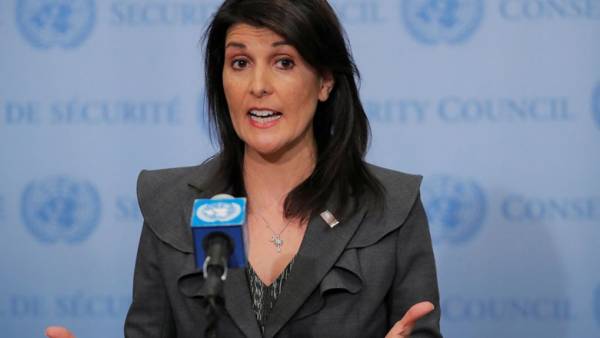 This was stated on Thursday to journalists the U.S. permanent representative to the UN, Nikki Haley.

“On Tuesday [25 September], the President will deliver a speech from the rostrum of the UN General Assembly. He wants to tell about the successes in foreign policy, which was the United States during the past year. And what will our future course,” said Haley.

She added: “He will also talk about protecting the sovereignty of the USA and what other countries expect of such protection”.

Speaking about the upcoming 26 September high-level meeting of the UN Security Council on Iran under the presidency of trump, Haley said: “I am Sure that it will be a meeting of the security Council, which will attract the most attention all the time.” According to her, will be “the dialogue on the non-proliferation regime, and that might make the world community to move in this direction”.

Earlier the U.S. permanent representative to the UN said the decision to trump to convene, on 26 September high-level meeting of the UN Security Council on Iran with the aim of attracting attention to the alleged violation of Tehran’s international rights. According to her, the US President personally to take part in this meeting as Chairman. Later, the permanent mission of the United States announced the intention of the tramp also to raise at the meeting of the non-proliferation of chemical weapons in connection with his alleged use in Salisbury and the situation in Idlib.