Tube Stalin in Moscow revealed the details of the Munich agreement

MOSCOW, September 20 — RIA Novosti, Igor Gashkov. In the State archive of the Russian Federation opened an exhibition dedicated to the Munich agreement — the deal Western powers and Nazi Germany, who decided the fate of Czechoslovakia. The Soviet government objected to the revision of borders in Europe, but they have not listened. 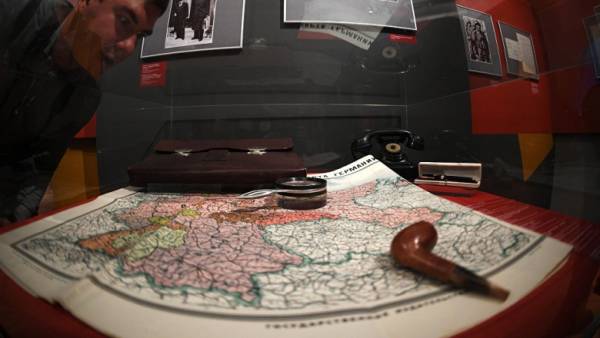 The exhibition displays the intelligence reports, telegrams residents, the documents marked “secret” and one of the famous pipes of Stalin.

The agent says the Girl

Summit Germany, France, Britain and Italy met in Munich on 29 and 30 September 1938. The summit meeting between Hitler, Chamberlain, Daladier and Mussolini was preceded by diplomatic training, which affected all the major world capitals. Moscow was known that emissaries of the Reich runs Europe, and negotiating. They are followed Soviet informants of different levels. The collected information was received in the Kremlin.

On exhibition at the state archives, presented the special reports of the intelligence Department of red army, reports of embassies, encrypt secret agents, notes of a Soviet correspondents abroad. On Stalin’s Desk lay the documents passed through many hands. Sources of information in particularly sensitive cases, was not revealed even to the leader.

So, from a Memorandum the number 8480, it follows that the Soviet leadership had a senior agent in the German government with the call Girl. “The girl said: Chamberlain arrived in Germany the following message to Hitler: immediate demobilization of Germany, the convening of a conference of the four powers, the withdrawal of Czechoslovak troops from the Sudetenland and the establishment of international police”. According to the same source, the Nazis refused the offer. “Hitler interrupted the Chamberlain and four-hour speech demanded the return of all the old colonies of Germany, non-interference in the Affairs of Germany to provide “assistance to the Sudeten Germans,” the Girl reported.

The main direction of the Soviet effort in 1938 attempts at rapprochement with Western countries in opposition to Hitler. As is known, these attempts have not crowned success. Documents reveal the frustration of Soviet diplomats to the reluctance of France to believe that the Soviet Union is ready to provide effective assistance to Czechoslovakia in case of attack the Nazis.