The PATRIOT PARK (Moscow region), September 19 — RIA Novosti. The President of Russia Vladimir Putin took part in the ceremony of consecration of the Foundation stone of the Main temple of the Armed forces, which is planned to erect in the Park “Patriot” near Moscow Kubinka tank Museum for the 75th anniversary of Victory in the great Patriotic war. 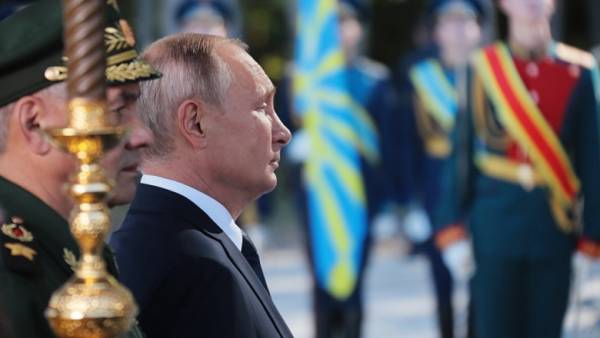 Together with the head of state in ceremony was attended by Russian defense Minister Sergei Shoigu, Patriarch of Moscow and all Russia Kirill.

After the ceremony, as planned, Putin will hold a meeting of the Military-industrial Commission, which ensures implementation of state policy in the sphere of military-industrial complex, military-technical support of national defense, state security and law enforcement.

On the construction of the main temple of the armed forces in honor of the ascension of Christ originally said Sergey Shoigu. The idea received the blessing of Patriarch Kirill.

The temple will become the spiritual, educational and educational center for soldiers, Orthodox priests and Russian citizens.

On site will house the exposition dedicated to the history of formation of the Russian state and the Armed forces.

The height of the temple will reach 95 meters (including the cross), the total building area of 10.95 square meters. The temple is designed for simultaneous stay of up to 6 thousand people.
He will have a few thrones to be named in honor of the main Christian holiday celebrating the Resurrection of Christ, the rest will be devoted to the heavenly patrons of the species and genera of the Armed forces.