Russian scientists have conducted underwater research in the Arctic. 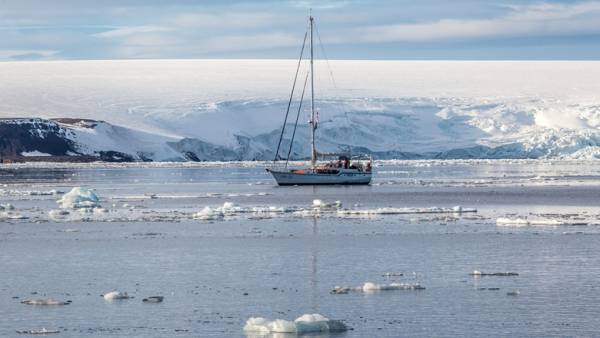 The first ever underwater archaeological research in the Arctic held in early September, the Russian explorers. To the remains of the British schooner that sank in the XIX century, immersed the participants of the expedition “the Open ocean: the archipelagos of the Arctic.” The expedition yacht “Alter Ego” has returned to Murmansk on September 14. The portal iz.ru contacted one of the members of the dive, and with the Director of the Museum of the Arctic and Antarctic and found out how the were working and that actually means in this finding.

That they were the first who managed to carry out underwater archaeological research in Arctic conditions, the expedition reported on the project page “Open ocean: the archipelagos of the Arctic” in Facebook. However, as explained by the portal iz.ru the Director of the Museum of Arctic and Antarctic Victor Boyarsky, it’s “not the first or the last,” and, in fact, in the history of the vessel, which was investigated by divers.

Here the competition is useless. The emphasis should be done on that first discovered and documented in “air”, which, incidentally, was looking for a very long time. Everyone knew where she had to lie, but no one could find. Now the participants of this expedition, it all came together, were favorable weather conditions — and they found it.Victor Boyarsky

“Air” steam ship, which belonged to the Englishman Benjamin Lee Smith. He is considered one of the most important explorers of the Arctic. “Ayr” Lee Smith twice failed to reach the archipelago of Franz-Joseph.

In 1880, trying to get to the East coast of Greenland (and failing), he discovered a large number of Islands to the West of the archipelago. In 1881 Benjamin Lee Smith returned to the Land of Franz Joseph, but the expedition was faced with unexpected difficulties. “Air” was icebound and died in a few hours, and her crew was forced to overwinter at Cape flora, NORTHBROOK island, which he also opened. Nevertheless, the expedition members managed to escape in 1882, they were able to return to the mainland on the captured ship boats.

The place of death “Airs” as the winter crew was described in letters and diaries, therefore, the location of the ship was well known. However, so far none of the modern researchers to detect it failed.“Being submerged underwater GoPro camera”

“The open ocean: the archipelagos of the Arctic” project, in which operates the expedition “In the footsteps of two captains”. Ironically, her story began almost 15 years ago with a search of “Airs”. For the first time to the Islands of the archipelago of Franz Joseph the participants of the expedition arrived back in 2005, in an interview with portal iz.ru in the winter of 2018, told Eugene Fenster — the leader of the expedition 2017.

Then, however, to find the ship failed. But the researchers stumbled on traces of the expedition of the Russian polar Explorer Georgy Brusilov — the fate of his schooner “St. Anna” was unknown in 1914 and this is her story formed the basis of the novel Veniamin Kaverin “Two captains”. The researchers decided to engage in further search of traces of the ship Brusilov — thus, the name “tracking the footsteps of two captains”.

In the summer of 2017, the fate made a new turn — hoping to find new traces of the “St. Anne” (find them neither in this nor last year and failed), they happened to be in the Bay where the lost “air”.

The ice we drove it in the Bay, where he drowned “the air”. We could not miss this chance. After all, we once first came here it was for her sake. We even have no specialized equipment was not only the sounders, sonars: pure navigational equipment to understand the picture of the bottom. And we decided to try it. We circled and somewhere in the 10th to 12th pass found an object. Put the GoPro camera, look, in principle it was possible to “read” a separate Board, that is, the object was clearly artificial.Eugene Forster the leader of the expedition 2017338 minutes under water

The study detected object included in the list of the key tasks of the expedition of 2018 (at the same time, the participants perform a number of scientific studies). Sail with the crew of “Alter Ego” went to the team of divers. Among them is the diver-rescuer of the international class Sergey Kovalev, who by this point has made more than 3 thousand dives, including at the North pole. They ensure that the work of archaeologist Mark Stepanova — he had previously been engaged in underwater research historical sites in the Baltic, the Volkhov, into the Black and Azov seas. The portal iz.ru contacted him the day after the return of the expedition to Murmansk.