MOSCOW, September 20 — RIA Novosti. Small shifts of the Earth’s axis, discovered several decades ago, were associated not only with the end of glaciation, but also with the flow of the mantle and redistribution of the mass of water in the oceans. To such conclusion the head of NASA, published a paper in the journal Earth and Planetary Science Letters. 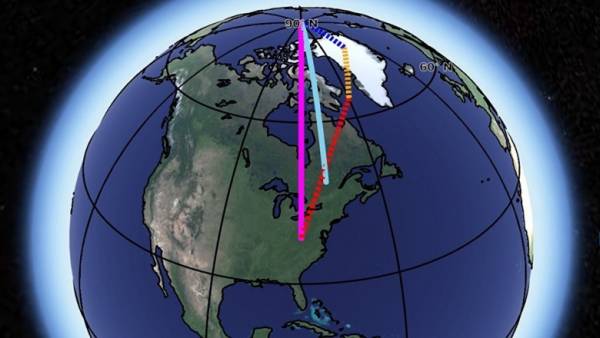 “Traditionally, only the end of the ice age was the main cause of the recent displacements of the Earth’s axis. We have created a computer model of this process and found that there is not one, but three sets of factors,” said Surendra Adhikari (Adhikari Surendra) from the jet propulsion Laboratory of NASA in Pasadena (USA).

Cosmic event of the era of Charlemagne correct the chronology

Earth, unlike most other planets in the Solar system, has a relatively stable axis. Its position by the gravitational interactions of our planet and the moon, has barely changed in the past few billion years, whereas the axis of Mars, Uranus, and several large moons of the giant planets shifted by tens of degrees.

Nevertheless, as observations show the end of the last century, the Earth’s axis is still a little, but shifted, moving about 10 inches per year in the direction of 74 degrees West longitude. Many scientists believe that such “migration” of the axis associated with the end of the ice age and changes in the structure of the ice cap. Other geologists say that such processes are clearly insufficient for explaining the current speed of the axis offset.

Adhikari and his colleagues found that the share of “heritage glaciation” accounts for only a third of these displacements of the axis, creating a computer model of the Earth that takes into account how various processes in the lithosphere and the hydrosphere affect the position of the axis.

Scientists drew attention to the fact that the distribution of matter within our planet depends not only on how hard the surface pushes the ice cap and where it is located, but also how to move the flow of mantle in the deep layers of the subsoil and the distribution of water in her oceans, rivers and soil.

Spotted the mysterious phenomenon on the Sun

By combining seismic data measurements, climate satellites and other observing systems work the bowels of the Earth, geologists have considered how each of these factors will affect the axis motion. To their surprise, they are all in roughly equal impact on her situation, explaining her shifts by about a third.

In particular, scientists have found evidence that the soil drainage in the United States and in India in the middle of the last century affected the position of the axis of the Earth, no less than the retreat of the ice North polar cap and melting of Greenland.