“To have an opinion about what is happening with my friends, I can”

Natalya Timakova told “Kommersant” about the reasons for leaving government. 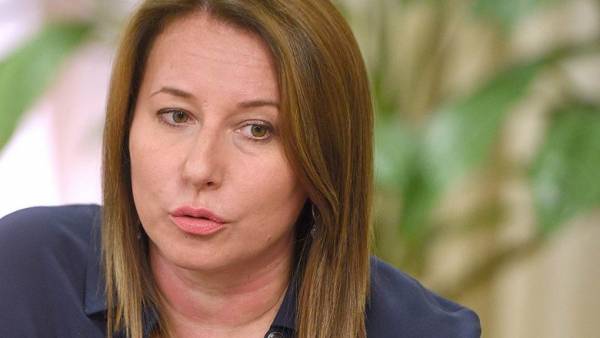 Prime Minister’s press Secretary Natalya Timakova shall deliver the case to former Deputy chief editor MIA “Russia today” Oleg Osipov goes in the Vice-President WEBB. To go to the Bank, it can this week. Since 2008, Ms. Timakova was press Secretary Dmitry Medvedev, in fact, as one of its key advisers in the years of his presidency, and after he was appointed Prime Minister. The reasons for the withdrawal of the government Natalia Timakova told the special correspondent of “Kommersant” Vladimir Solovyov.

— About your departure talked for a long time. Why leave now?

— For the first time about how to replace a kind of activity and to try something other than civil service, I started to think three years ago. This was due to the fact that this moment was finally working in government, where Dmitry Anatolevich (Medvedev.— “B”) passed in 2012. It was built anew, the Department press service, referrentur. Then to the sphere of my responsibility was added to the Department of culture.

At some point it seemed to me that all I could do in this position, I did. But it is one thing to think about the decision, and another thing — to act.

Last fall, I told Dmitry Medvedev that after the new political cycle — the election of the President and approval of the new government — would like to replace a kind of activity and to try outside the civil service. It just happened.

— Somewhere in may and began to speak with about your care.

— I don’t think it’s right to make any secret of his career, so it is not very concealed. The time of departure depended not only on me but also on how fast the Prime Minister will decide who he’d like to work on.

Casting lasted for almost four months. As he passed?

Prime Minister has formed a certain criteria, and then we are together — the list of candidates. He met with them and made a choice.

There were a lot of applicants?

— A few people. He did not meet with all.

— Dmitry Medvedev considered that will be able to work with him. Oleg was a correspondent of the Kremlin pool and when I was working in the Kremlin press service Vladimir Putin, when he became press Secretary Dmitry Medvedev. Traveled with us in the trip, I communicated with the Prime Minister, was interviewed. They have a certain personal touch. In addition, Oleg from the correspondent grew up in the head of a large enough structure in MIA “Russia today”. He has management experience that matters. He comes not just to the position of press Secretary, but the Deputy head of the government apparatus, who will oversee two departments — referenceno and the Department of press service and information.

In the case of Oleg Osipov is a combination of journalistic past, the presence of contact with the Prime Minister and administrative experience.

— You were more than just a spokesman. Fulfilled the role of Advisor to Dmitry Medvedev, his successor with him picked up. Oleg Osipov in this sense, equivalent replacement?

— He has everything to become an equivalent replacement. It’s just gonna take some time. Still, I worked with Dmitry Medvedev 12 years. Rapport and trust do not occur in a vacuum.

— It is difficult to make the decision to leave? The government rarely lets go. Not in the sense that it does not let people away, but rather people held for her.

— It is difficult. In October will be 19 years since I came to the White house and became Deputy head of the press service with the new Prime Minister Vladimir Putin. He was the man who took me to the civil service, where I’m the last 19 years was. It’s a big part of my life, here I felt confident enough. But when 19 years in fact engaged in one and the same, even at different levels of responsibility and involvement in decision making, understand what want to try something new. We must move on. I will not hide, this decision requires a lot of effort.

— How high was the level of trust between Dmitry Medvedev and you?

— To be press Secretary, which really helps the confidence level should be high. It is important to understand that, no matter how tough you are the press Secretary or Advisor may be, you won’t get the CEO to do something that he is not internally agree. A single leader cannot be forced to do anything, if he wants. In conversation with Dmitry Medvedev, the words “organic” and “neorganichno” we have a pop up constantly.

— You “you” with the Prime Minister?

He took your decision?

— I’m very grateful to him that he upheld the decision. I think he understands that I need to try myself in something else.

— What was the biggest stress on a press-secretarial work? The war in Georgia, the presidential elections of 2008 or the time when the decision was made that Dmitry Medvedev will not go for a second term?

— War in Georgia — it was a very difficult and challenging time.

Where were you at this point?

— Can you tell. I’m the night, I was called by correspondents of TV channels and agencies, told what is going on. Early morning of 8 August 2008 I’m supposed to fly to Samara, where Russian President Dmitry Medvedev was supposed to meet. At five in the morning I went to Domodedovo to fly. Arrived at the airport, when he called the aide-de-camp of the President and said he returned from vacation on the Volga and to go anywhere is not necessary. I returned to the Kremlin, and several days were sleepless work: meetings were held including at night. It was a very difficult time.

— Why did VEB? There will be to do something? With your understanding of the processes, hardware, weight seems to be a direct path into politics. And then the web.

— Politics what? I never thought of myself as an independent character in politics. The press Secretary is a function in the head. The person who organizes around it the media space.

— Recently in Russia was made to interview the spokesperson.

— (Laughs.) I would like to leave aside. This is a topic for another conversation, what is the job of press Secretary in the current environment. So to try themselves I want. I’m in a different structure. And the EBV because Igor Shuvalov — my colleague with whom I have been working. And when I decided I wanted to change occupation, I told him about it. This coincided with his appointment to the position of the head of VEB. Igor Shuvalov has an ambitious idea to transform the Bank into a real development Institute. Not just in a structure that supports certain state projects, and the company that invests in the development of the territories. One of the areas that he wants to develop, is related to urban studies, urban culture. The team that is going to do is formed, and Igor Shuvalov has offered me in addition to a GR (Government Relations — relations with the government.— “B”) and corporate philanthropy and its area of responsibility.

— During your work in the power it used to be that your position differs from the official. To take the attitude to the arrest of Kirill Serebryannikov.

— Nothing prevents me, as a person, to maintain Kirill Serebryannikov, with whom I have a very good relationship and whose work I appreciate.

— “It serebryannikova” associated with the government. To be in power and to consider that this case is unfair is how to get along in one head?

— Let’s start with the fact that power — it is different. Now Cyril is in the hands of the judiciary, not the government, of the government apparatus. And I have no influence on its fate from the point of view of the legislation or something else. And to have an opinion about what is happening with my friends, with people whose work I like, I can. And I don’t need to abandon it.