The US has accused Russia of involvement in the poisoning of his brother, Kim Jong-UN

“Why, having voted for the imposition of sanctions 11 times, Russia retreats from them? We know the answer. Because Russia is cheating. And now they were caught,” — quoted Ms. Hayley Bloomberg. 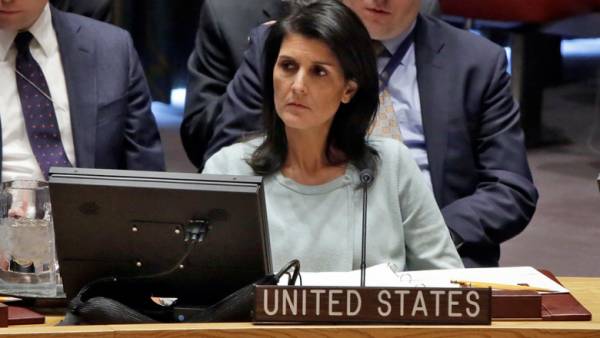 According to the Ambassador, Moscow and Pyongyang bothering to pursue a restrictive policy and help the regime of Kim Jong-UN to avoid sanctions. In particular, we are talking about ships that supply the DPRK’s fuel and oil products to bypass international sanctions. Ms. Haley noted that the violations are “systematic”, while Moscow tries to hide them, “regardless of whether they are committed by Russia or the citizens of other States”.

appeared In the media a picture of one of the probable killers of the brother, Kim Jong-UN

The Ambassador also said that Russia could be involved in the murder of Kim Jong-Nam — brother-the leader of the DPRK committed with the use of nerve agents. “It was with the assistance of Russia, which passed biological substances North Korea,” said Ms. Haley (quoted by TASS).

“Apparently, we’re approaching the solution to the Kennedy assassination,” — said in a Facebook statement by the U.S. Ambassador, the official representative of the Russian foreign Ministry Maria Zakharova.

Kim Jong-Nam, was killed on 14 February 2017. Malaysian authorities said that the death was caused by exposure to the banned nerve agents.