The number of victims of Typhoon “Mangkhut” exceeded 60 people

59 people were killed, 47 were wounded, 16 missing as a result of Typhoon “Mangkhut” in the Philippines, reported the news portal Rappler on Sunday, September 16. 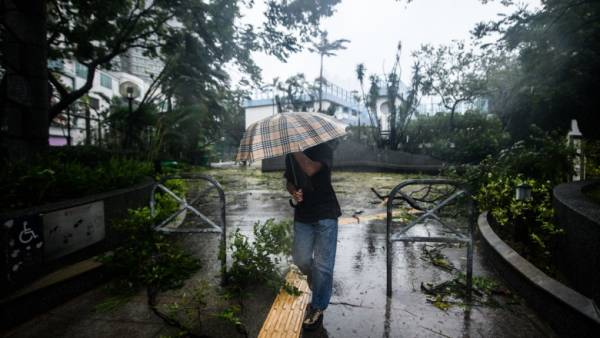 The mayor Victorio Itogon Pelanggan said that nearly 50 people could be locked in one of the barracks due to a landslide. According to local police, he destroyed four of the miners ‘ barracks. They killed 26 people, eight are still missing.

This dramatic video shows rescuers preparing to save a man trapped in floodwaters in the Philippines. Mangkhut’Typhoon’s ferocious winds and pounding rain caused widespread flooding. The man in The video is now safe. https://t.co/72AjfeX1rN pic.twitter.com/LioIlui4uQ

Earlier it was reported 32 dead and 29 missing.

Typhoon “Mangkhut” reached the North-Eastern coast of the Philippines on the evening of 14 September. The wind gusts in some areas reached 170 km/h and wave height of 6 m. the Disaster affected more than 250 thousand people, about half of them sent to the temporary accommodation centers. According to forecasts of weather forecasters, in the region are still expected to be heavy rainfall that can cause floods and vanishing of new landslides.

Sunday, September 16, Typhoon “Mangkhut” reached the South of China, passing close to Hong Kong, where as a result from tropical cyclone, affected more than 100 people.

See also: Typhoon forced the guests in a panic to leave the wedding (video)