KHABAROVSK, 16 Sep — RIA Novosti. The statement of the President of Russia Vladimir Putin at the WEF on Ruslan Bashirova and Alexander Petrov wasn’t a workpiece, said press Secretary of the President Dmitry Peskov in the “Moscow. The Kremlin. Putin” on TV channel “Russia 1” on Sunday. 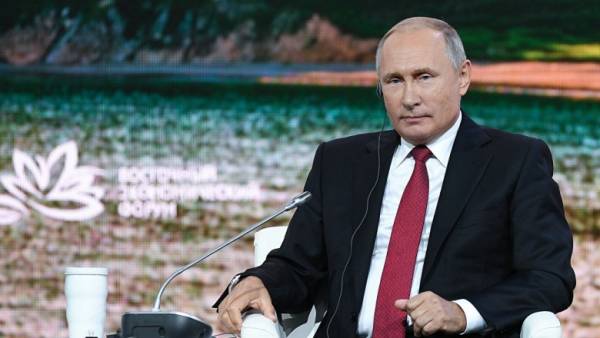 Earlier it was reported that the UK suspects Petrov and Bashirova poisoning in Salisbury Sergei Skripal and his daughter. At the WEF plenary session moderator: journalist Sergei Brilev asked about these citizens, Putin responded that the Russian authorities know who are the Petrov and Bashirov, and invited them to the media. The next day Bashirov and Petrov gave an interview to RT.
“No, it wasn’t blank,” said Sands. He noted that Brilev “would not be a journalist if I took advantage of this opportunity.”

“What the President said what he said, it was really his decision. It was a surprise for us, we didn’t know about it,” said Sands. He also stressed that “neither Petrov nor Bashirov to Putin are irrelevant. And to the Kremlin, too, of course.”

Fourth of March in Salisbury was poisoned, former GRU officer Sergey Skripal and his daughter Julia, which triggered a major international scandal. In London said that the incident involved Russia, Moscow categorically denies it.

Russia has repeatedly offered to conduct a joint investigation of the incident, but London ignored the initiative and denied access Scriply. Also the foreign Ministry has accused the British Prime Minister Theresa may in a lie. So, she claimed that the poison was manufactured in Russia. However, in the laboratory Porton Down is denied.

Later London showed photos of two “suspects in the poisoning Skrypalia”, claiming that two officers of the GRU — Alexander Petrov, and Ruslan Bashirov. In Moscow said that the names of Russia “nothing to say”, and again urged Britain to move on from accusations and manipulation to cooperation.