Sex, pins and spikes: where did the punks

The first post-war decade, the youth subculture succeeded each other one after another, without creating that species diversity, to which we are accustomed today. But in the 1970s, a single anti-mainstream begins to disintegrate. 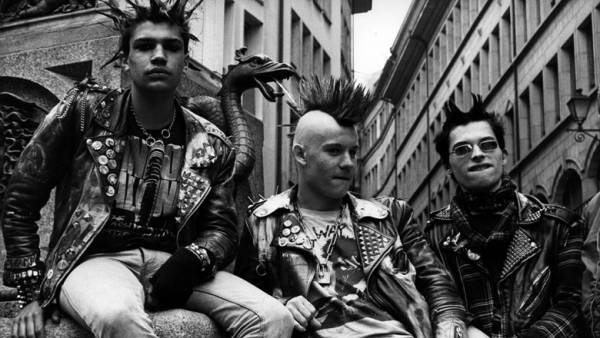 One reason for this is the further development of rock-n-roll, who broke into mainstreamy pop-rock, hard rock with his initial interest in psychedelics and punk rock is the fastest and most aggressive species, which grew out of garage rock.

children in the streets. Where did these hipsters and where did they go

In fact the term punk rock was first used by the critics precisely to describe the creativity of garage bands in the late 1960s — early 1970s. From the beginning the term “punk” included not only the manner of performance, but also external style of the musicians. If rock ‘ n ‘ rollers of the 1960s tried to look fashionable, the punks emphasized their appearance disregard for the mainstream.

Dirty and torn clothes, unkempt hair, deliberately sloppy logos of the groups on the jackets, the punks were opposed not only pop culture, but the rest of the counterculture. One of the founders of the aesthetics of punk can be considered Richard hull — Creator of the groups Neon Boys, Television, Voidoids, Heartbreakers, and Dim Stars. Still being the frontman of the band Television, he began to appear on stage with short tousled haircut in contrast to the long hair hippies and rockers and sophisticated hairstyles disco acts.

Other founding fathers of punk is the Ramones. However, the American team likely to thank for the musical development of punk rock. During Studio recordings of their albums musicians have used a metronome, which worked on the highest speed, which previously no one used. Just aggression and speed in the future will become the hallmarks of punk rock.

After the almost constant economic growth of the 1960s, which was celebrated not only in USA but also in Europe, it is quite severe the 1970-ies. The recession in the us economy, laced with the fuel crises in 1973 and 1979 and rising energy prices, major economic downturn in the UK completely changed the mood in society.

Is “sugar” groups: what you should know about the birth of rock ‘ n ‘ roll

If the youth of the 1960s for the first time got the opportunity to spend on myself, buy nice clothes, motorbikes and hang out in clubs and bars, the prospects for young people in the next decade was much less attractive. That is why in the 1970-ies so popular in Western Europe at the same time become left-wing and right-wing ideas, began the rise of football fanaticism, and in General, the shift promoting love hippies came filled with aggression subculture.

Before punk rock came on the big stage in the formation of the punk aesthetic. It all started with t-shirts with obscene prints. One of the most iconic print was Snow White & the Sir Punks first appeared in 1967 in the journal the Realist, where he was part of the poster Disneyland Memorial Ogy.

Gradually punk became fashionable pins, silver jewelry and spikes, and emphasized men’s clothing items like military boots and leather jackets-black leather jackets could be combined with such women as, heavy makeup, stockings, and ballet tutu. Clothes were often deliberately torn to pieces — in this case, hair clips and pins carried not only aesthetic but also functional sense. The most notorious punks were used as items of clothing garbage bags, cellophane, wrapped in garter and wore a lot of suspenders.

As for the hair, many punks began to devote special attention rattrapante stacking hair lacquer. By the mid-1970s, fashion began to enter the Iroquois, which later became the symbol of punk. However, in the seventies, the Iroquois were still of a modest size, and in bright colors they were not painted.