The canadian territory of Yukon miners found a mummified baby wolf and deer, the caribou, which, as scientists believe, more than 50 000 years. 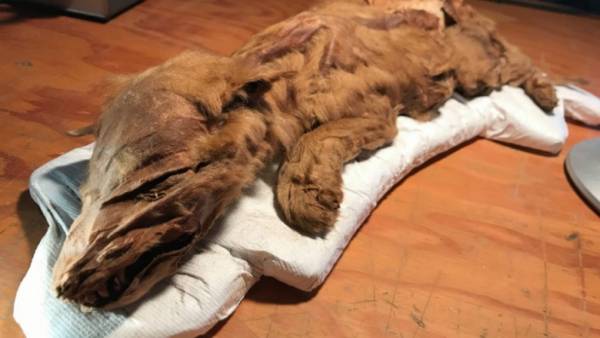 Two mummified animals were found by miners in 2016; last week, findings were presented to the public. The ancient animals preserved hair, skin and muscle tissue, which is a rarity. Moreover, as noted by paleontologist Grant Zazula (Grant Zazula) BBC, according to available information, this is the only discovered at the moment mummified wolf of the ice age.

A baby wolf is almost completely preserved, in contrast to the fawn. From the last remained only the head, torso and two front legs. As shown by radiocarbon Dating, the remains are more than 50 000 years.

“The remains of the wolves, Dating back to the ice age, relatively common in the Yukon, however, the fact that the animal is preserved with skin and hair, is an exceptional case,” — said Elsa Ponciroli (Elsa Panciroli), a paleontologist from the University of Edinburgh. The researchers hope that future DNA analysis will allow the animal to obtain new information about the wolf populations that lived in the Yukon and in the distant period.