“Boy”: Arkady Rotenberg about Putin and the Crimean bridge

The billionaire is convinced that the title “king of order” against him is an exaggeration. 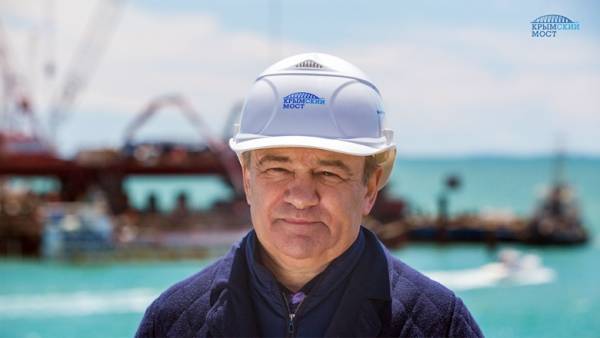 Co-owner of SPM-Bank, “Mostotrest and Stroygazmontazh” Arkady Rotenberg has appeared in the TV channel “Russia 1” on September 16. In conversation with journalist Naila Asker-zade billionaire named presenter chief bridge-Builder “of our country,” told about a “touching” relationship with the head of state, the construction of Crimean bridge and life under sanctions. Forbes selected the most interesting moments from the interview of the businessman.

The decision to build the Crimean bridge. “First, someone has to do it, secondly, I felt the strength, the strength in his team, was quite sure. Although, when it came from, it is late, more intelligently and with less emotions… in Any case not regretted, but understood the responsibility we have undertaken. The President said — we have to do. Naturally, we took it consciously.”

Of course, it was the excitement… the Team is very cohesive and, as it turned out, competent. A lot of know-how there was… nothing ventured,… He builds a bridge.

About the future of the bridge. “100 years of inactivity. I’m sure a lot of scientific institutions, all weighed, all measure up, engineers and environmentalists. Piles are installed in such a way that the natural conditions they are not afraid, will stand. Bridge spans, too.”

About the appearance of Vladimir Putin at the opening of the bridge. “When he approached in his eyes was such a joy, and I was very pleased that it gives him great joy and pleasure.”

About the possible construction of a bridge to Sakhalin. “We have gathered here [in Crimea] 30 of the best bridge construction crew. Now they came in one team. So now we can perform any tasks that are put before us. If there is such a task [to build a bridge to Sakhalin island], I think we can handle it. We have every reason in order to cope with this problem, everything is there. Go to the competition, if will be best if you trust us with, we will build”.

About “the touching relationship” with the President. “We grew up together, that from childhood we have left. I don’t think that someone can cause some jealousy. This boy from the boys ‘ lives, it is in any case not apply to the President of the Russian Federation. We have the following relationship from the childhood, that was different.”

And if I’m President, the head Pat is deserves jealousy. But it is not the President, is the person with whom we started to fight, and we have something to remember from our childhood.

About judo: “[Last fight] I think 15-20 years ago. Now people are young, they tend to attack you, you come out bruised. Not even that scary, all scratched, all so some… And so thank God the sports health while not really leaving, so still do things that many young do not. But to fight as, I think, is not necessary. Maybe then we’ll start to fight, we’ll see.”

About dealing with Vladimir Putin. “With the President on you, and with a man, whom I have known since childhood, on you. The President is the President, and the person with whom we adolescence — it would be foolish if we were to “you.”