Serbian Prime Minister is an open lesbian. But LGBT activists against its participation in a gay parade

Serbia is the only Balkan country where the government is headed by out lesbian. But why, then, some activists of the Serbian movement in support of LGBT rights object to the participation of Ana, Brnabic in a gay parade, which is held this Sunday? 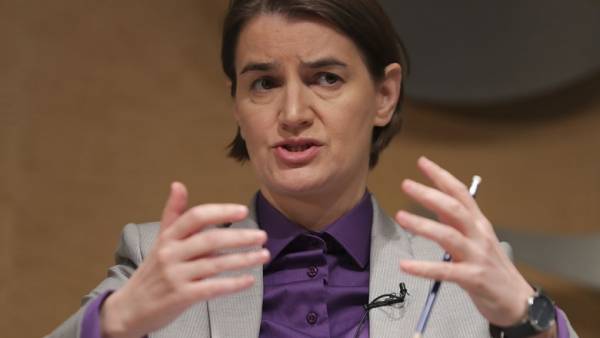 When Ana, Brnabic last year was appointed Prime Minister; this caused a surge of enthusiasm in the LGBT community — she became not only the first woman to head the Serbian government, but also the first activist of the gay movement, which received such a high position in the Balkans.

She participated in the pride last year in Belgrade, surrounded by posters with slogans like “Ana is with us”; she was photographed then with dozens of people.

But a year later the case with LGBT rights in Serbia, situation is not brilliant, new laws to protect them and not adopted by the Parliament, and the number of attacks on activists and gays has not diminished.

In an Orthodox country with conservative views, despite the fact that Serbia is seeking membership in the European Union, is still widespread discrimination and violence against members of the lbgt community.

On the eve of the gay pride parade in 2018, a group of activists, frustrated by the slow progress of reforms, launched a campaign under the motto “Say No. Its primary objective is to prevent the Serbian politicians to take part in the processions of pride, since they, according to activists, has done little to protect the rights of LGBT people.

The main target of the campaign was the Prime Minister Ana Brnabic — for the reason that, according to activists, its activities in promoting LGBT rights, brought some frustration.

Speaking at gay pride in 2017, Brnabic said that the issue of gay rights only after will be solved more important problems facing the Serbian society — the decline in inflation, increase of pensions and the General standard of living.

“It was a scandalous statement,” — said the head of a group of activists Predrag Azdejkovic. He began the work of organizing a new gay pride parade in June, with the aim to return the pride to ordinary people and to take it away from politicians.

He was dissatisfied with the work of other gay activists. “They say — we now have your Prime Minister, two of parade, so that everything is in order. But really it’s all fiction,” — said Azdejkovic.

In Serbia is still widespread homophobia — for example, a recent poll showed that at least 20% of gay men seeking an apartment, faced with the refusal.

Outside the capital the situation is even worse. According to polls, 90% of Serbs do not agree with granting members of the LGBT rights to adopt children, and about 70% oppose the rights of one of the gay partners to inherit property after the death of the other.

In Serbia adopted a law against discrimination but it is rarely used, and criminal cases are almost never brought to court. Same-sex marriages in Serbia is still not legalized.

The first gay pride parade held in Serbia in 2001, ended in violence when hundreds of hooligans and extremists attacked the participants, despite the police presence.

In 2010 with the March in Central Belgrade, more than 100 of its members have been attacked and injured. Since then, the Ministry of internal Affairs was repeatedly denied activists of the gay movement in the permit for the parade.

Only in 2014, the pride resumed, again under heavy police protection.

Four years later, in the center of Belgrade was opened information center of the parade, over which hung the rainbow flag of the LGBT movement.

“If we opened the center ten years ago, I’m sure he would be destroyed,” says Goran Miletic, one of the organizers of the Belgrade pride.

“Some people can’t walk by without having to not to curse us, but then they leave, and that’s good — before we just beat,” he says.

In an interview with Pride magazine, issued in Belgrade, the Prime Minister, Brnabic said that her refusal to support a gay pride parade would be hypocrisy.

“I want to make an active contribution to combating stereotypes and prejudice,” she said.

The organizers of the gay parade in Belgrade believe that if in the first ranks of its members will appear to the Prime Minister, it will show the participants of the LGBT movement in Serbia that their country is changing.