In the elections in Primorye after the counting of 0.45% of the ballots leader Tarasenko

VLADIVOSTOK, September 16 — RIA Novosti. The acting Governor of Primorye Andrey Tarasenko after processing of 0.45% of the ballots in the second round of elections of the head of the region received 62,16% of the votes, according to the website of the CEC. 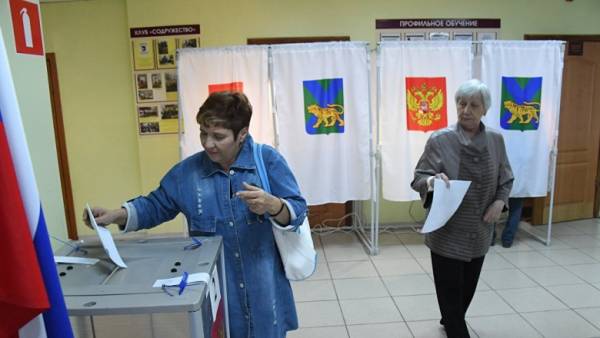 President Vladimir Putin in early October 2017 signed a decree about dismissal of the head of Primorsky Krai Vladimir Miklushevsky. 4 October 2017 the acting Governor was appointed Andrei Tarasenko. In the single voting day September 9, none of the candidates for Governor of Primorye was not able to recruit the necessary number of votes — at least 50% + 1 vote. In the second round of elections came Tarasenko, who received in the first round 46,56%, and the Deputy of legislative Assembly of Primorski Krai, the candidate of the Communist party Andrey Ishchenko, who scored 26,63%.