The Solar system has a competitor

MOSCOW, 14 sen — news, Tatyana Pichugina. The star TRAPPIST-1 discovered seven planets very similar to Earth. Everything is covered with a dense atmosphere and have huge reserves of liquid water. 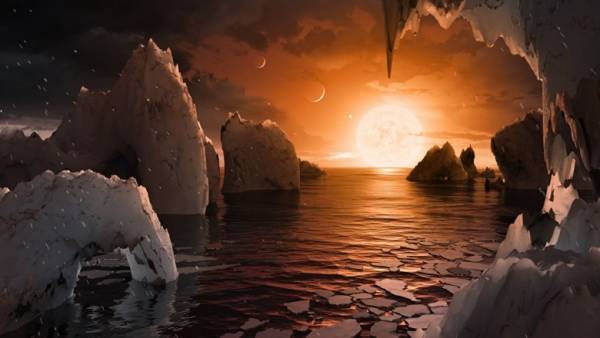 Despite the hard radiation from a red dwarf star, scientists believe these celestial bodies are the most promising for searches of life.

The closest family of exoplanets

Star TRAPPIST-1 in the constellation of Aquarius is located just 39 light years from us. It is a red dwarf, a very small and cold compared to the Sun, moderately active. In 2016, astronomers have discovered three orbiting planets. Their drives against the background stars fixed orbital and ground-based telescopes.

As astronomers choose suitable for the colonization of extrasolar planets

A year later, the system detected four planets. They are all the size of the Earth, but because low-mass stars (eight percent the mass of the Sun) located supercompactor. The diameter of the planetary system TRAPPIST-1, named, incidentally, after “seeing” her Belgian telescope, located in Chile, is only 0.06 distance from the Sun to the Earth (one astronomical unit).

In the system of TRAPPIST-1 is best known to date, earth-like, potentially habitable planets. The periods of their revolution around the star is a multiple of each other that allows to speak about the longest chain resonances — planet periodically converging.

In the opening of this amazing planetary system was attended by Russian scientists — Artem Burdanov of the Ural Federal University and Alexei Chushev, graduate student, University of Leicester (UK).

The history of red dwarf

TRAPPIST-1 — very pale star, which complicates its study. Similar red dwarfs are common in the Universe, they account for a large part of the stellar matter of the Galaxy. It is believed to be young stars. But data analysis showed: TRAPPIST-1 is an exception. Her age is estimated at 7.6 billion years or more.

Emission of plasma from her rare. The structure of the photosphere is unknown, but astronomers think there might be a giant cold spots and a small, very hot torches a temperature of more than four thousand Kelvin.

Because of the proximity to the luminary planets are under intense ultraviolet and x-ray radiation is able to literally sterilize the surface and destroy the atmosphere. Such intense radiation will not stand none of the known on the Earth of microorganisms, including the most radiation-resistant bacterium Deinococcus radiodurans.

Only the dense atmosphere with the ozone layer gives us a chance to close to ground conditions. In any case, scientists are prepared to look at the planets atmosphere, and biomarkers that increase the probability of the origin of life, primarily ozone.