Perhaps in the future this trend will only increase. 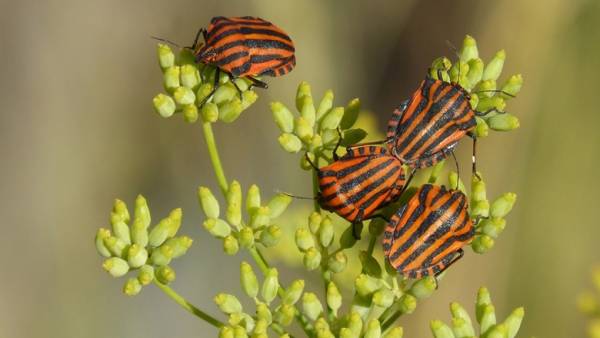 Researchers from the Institute of ecology and evolution them. A. N. Severtsova RAS analyzed “invasion” invasive species of beetles of the family Chrysomelidae (Chrysomelidae), is still not seen on the territory of our country. Among the reasons for their penetration in the international trade of live plants. I wonder what part of “aliens” although it came in our country with the “other” plants now successfully caught and locally, completely new types. The corresponding article was published in PLoS ONE.

Petrified cemetery of insect captures the explosion of diversity

The scientists first made a list of leaf-beetles introduced on the territory of European Russia in the past and the current century, and found that all of these nine types. The information was provided as the results of the field work of the authors in the years 1988-2018, and a number of entomological collections of our country and other countries of Europe. Until the second half of the twentieth century invasion of beetles were extremely rare.

It turned out that among the new species of leaf-beetles there are even some that under natural conditions almost can not spread to new territory. For example, Chrysolina americana — beetle, which has reduced wings, which he is not able to fly. This insect almost never leaves the plants on which the parasite: rosemary, lavender, sage, thyme and perovskia. Among other things, this beetle is highly thermophilic, which traditionally limited its spread hot Mediterranean countries.

In 2013, however, as the authors note, it was able to identify in the Crimea (13 specimens collected near Yalta). So now they have appeared and in Russia.

Among other types of tropical Leptomona erythrocephala, of which entomologists are found in expeditions 2017-2018 in Sochi (a parasite on strawberries), far Eastern Luperomorpha xanthodera (a pest of citrus and ornamental plants). In addition, scientists have found in Sochi a single female (however, they are sure to have a whole population) Medythia nigrobilineata, far East well-known pest of soybeans.

Caterpillar from Japan leaves on leaves, the mark of Zorro

In Krasnodar Krai the entomologists found Epitrix hirtipennis — beetle from the New world, and found it not only on tobacco crops on plantations, but also on ruderal (weedy) plants. This pest is dangerous because intensively propagated on a number of cultivated plants from the same tobacco to potatoes and tomatoes. Other pest-alien — Phyllotreta reitteri — almost safe for agriculture as specializiruetsya on the bug-infested broadleaf without selhoznaznacheniya. Finally Zygogramma DOI was introduced for biological control of plant-alien from North America common ragweed (Ambrósia artemisiifólia). However, as soon revealed, although Zhuk and actively reproduce it, this does not prevent a malicious weed-allergen to continue active expansion in Russia where it causes great damage to livestock and to public health.

The most famous and the most “successful” bug-alien from the family Chrysomelidae is Leptinotarsa decemlineata or Colorado potato beetle invaded the territory of modern Russia in the second half of the last century. It still significantly reduces the yield of potatoes in our country.

The authors found that the speed of getting new leaf beetles in Russia has grown significantly over the last 70 years. Among the reasons for this phenomenon — the active importation of seed material and live plants from other countries, were very rare in Soviet times. Coupled with the softening of the climate, this means a new pest species of leaf beetles will continue the occupation of our country in the future.