The President of Russia Vladimir Putin and Prime Minister Shinzo Abe held a private chat in Vladivostok after the Russian leader at the plenary session proposed to conclude a peace Treaty between the two countries until the end of the year. On Saturday, September 15, reported the TV channel NHK, citing government sources. 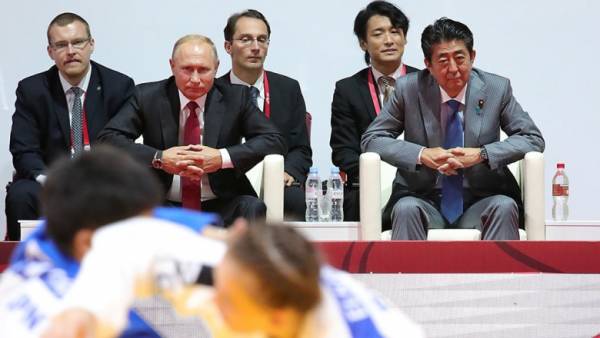 According to the sides of the channel, the conversation was held in the judo competition, which called for both leaders. When it was attended only by the interpreter. The content of the conversation is not disclosed, but most likely it was about the main positions of the parties regarding Putin’s proposal and further talks on the issue, said NHK.

While Japanese Prime Minister himself has hinted that had an exchange of views with Putin. “Japan’s position is to first solve the territorial issue and then sign a peace Treaty. This position I voiced both before and after this statement (the Russian leader of a peace Treaty). President Putin was a reaction,” he said during the party’s debates after returning home.

12 Sep Putin during a speech at the Eastern economic forum invited Abe to conclude a peace Treaty before the end of 2018, without pre-conditions. He added that on the basis of the Treaty countries will continue to resolve disputed issues. In response, the Japanese Cabinet said that Japan would not conclude a peace Treaty with Russia until not yet settled the territorial dispute.

The peace Treaty between Russia and Japan have not signed in for over 70 years. The conclusion of the Tokyo refers to the return of the Islands of Iturup, Kunashir, Shikotan and Habomai. Moscow believes that the Southern Kuril Islands became part of the Soviet Union at the end of the Second world war and sovereignty over them is unquestionable.

the First results of the Eastern economic forum in Vladivostok