Terrorists intend to use chlorine during the staging himataki in Idlib

MOSCOW, 12 Sep — RIA Novosti. The terrorists are preparing to use toxic substances based on chlorine against the participants of the staged shooting in Idlib province, said at the Russian Centre for reconciliation of the warring parties. 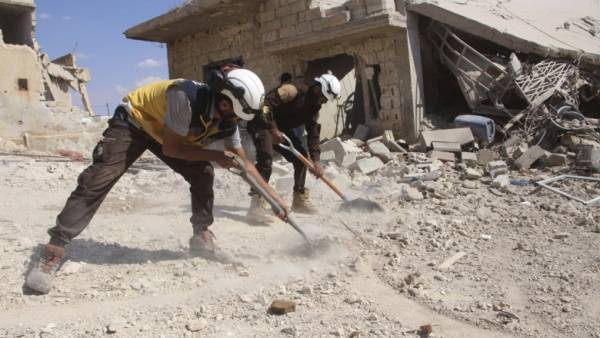 It is noted that in the preparation of provocations are also involved “Belorusochka”. For filming in the North-Eastern part of Khan shaykhun is specifically deployed the field medical facility.
The planned chemical attack to blame the Syrian army.

“From September 9 activists of the “White helmets”, in the village of Khan shaykhun every evening conduct rehearsals staged video “himataki” with up to 30 civilians, including about a dozen children from eight to 12 years”, — told in the center.

Also, there is evidence that staged himataki prepare in the same city — Kafer-Go. To mock the militants seized in the province of Aleppo, 22 children with their parents.

“Another group of orphans, abducted from the refugee camps, designed for the shooting deaths scenes now contained in one of the premises of the prison, “Abci”, controlled by the terrorist group “dzhebhat an-Nusra*”, — stated in the message.