Haley: Iran can’t be fixed, until he corrected himself

NEW YORK, September 13. /TASS/. Iran ultimately cannot be forced against his will to change course and abandon the expansion of its influence in the middle East. This opinion was expressed on Wednesday on air of TV channel Fox News, U.S. permanent representative to the UN, Nikki Haley. 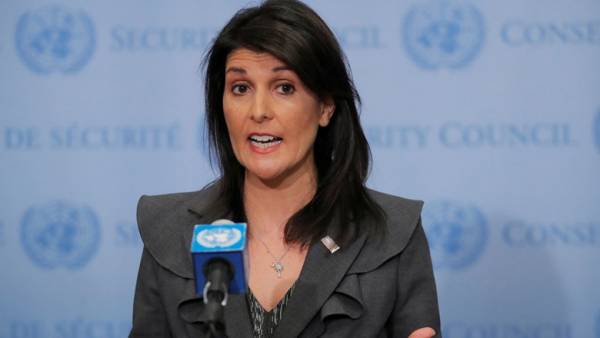 She recalled that the United States 7 August resumed the action of certain sanctions against Tehran, canceled earlier due to a Joint comprehensive plan of action (SVPD). “On 7 August we resumed part of the sanctions, November 5, we will strike at their oil and foreign banks. I believe they [Iran] will start to really feel the impact of such steps,” says the American diplomat.

“However, in the end, nothing will fix Iran, until he corrected himself,” admitted Hayley. “The President [of the USA Donald] trump at least says that we [USA] don’t like to wait. Iran is already feeling the effect of the pain [us sanctions] is weakening, we are suffocating it to the point where he will have to deal with [the problem] and ballistic missiles and support to terrorists”, — added the Ambassador to the UN.

The US and its allies have repeatedly accused Iran of meddling in the Affairs of other States, financing and supply of weapons to terrorist groups.

Washington has said it is ready to provide Tehran unprecedented pressure, including to introduce a more stringent regime of sanctions if Iran does not change policy.

In may, trump announced the withdrawal from the agreement on the Iranian nuclear program and promised not only to renew the old, but also to impose new sanctions against Tehran. Part of the American sanctions have started to operate on the night of August 7, covering in particular the automotive sector of Iran, the sale of gold and some metals. Restrictions on the export of petroleum products will come into force on 5 November.

Other participants in the transaction — Russia, China, France, Germany and Britain — do not approve of the US withdrawal from the AGREEMENT and remain committed to the agreement.