Prime Minister Shinzo Abe called for “break the shell of mistrust” between Tokyo and Moscow to make progress towards signing a peace Treaty. Abe added that to sign the document between Russia and Japan is possible — it is necessary to achieve success in the implementation of joint economic activities in the southern part of the Kuril Islands. 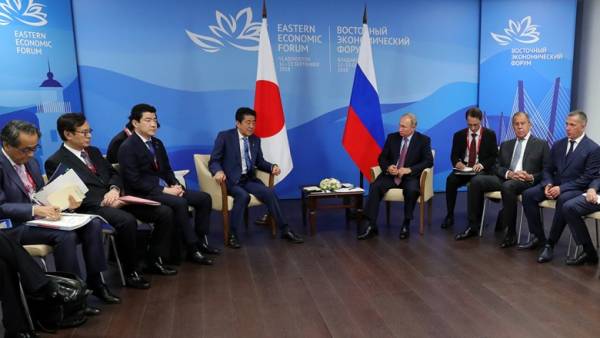 “Break the shell of mistrust” between Moscow and Tokyo has proposed to the Prime Minister of Japan Shinzo Abe. He called on the parties no longer trust each other and to develop mutual understanding between Russians and Japanese.

“It is important to promote the understanding of residents of both countries on this issue and to establish the atmosphere (for the conclusion of a peace Treaty — “Газета.Ru”),” — said Abe.

The head of the Japanese government stated that the peace Treaty between Russia and Japan could be signed with the successful implementation of joint economic activities on southern Kuril Islands.

Since the mid-1950s years, Moscow and Tokyo with varying degrees of success conducting consultations, trying to draft a peace Treaty at the end of the Second world war. The main obstacle to this is the membership of the South part of the Kuril Islands: after the war, the entire archipelago was incorporated into the Soviet Union, but Tokyo disputes ownership of the Iturup, Kunashir, Shikotan and group of Islands Habomai.

The Russian foreign Ministry has repeatedly stated that the Russian sovereignty over them with appropriate international legal clearance, cannot be questioned.

Russian President Vladimir Putin on 12 September invited the Prime Minister of Japan Shinzo Abe to conclude a peace Treaty between the two countries “until the end of the year and without any preconditions.” According to Putin, this idea came to his head was born spontaneously and directly at the plenary session of the Eastern economic forum, held on the island of Russian in Vladivostok.

However, the Japanese side is not ready to sign a peace Treaty. Before that “must be resolved the question of the Northern territories,” Reuters words of the Secretary-General of the Cabinet of Ministers of Japan Acehide Sugi. He stressed that Putin’s proposal to sign a peace Treaty before the end of this year, says the strong desire of the Russian leader to develop bilateral relations with Tokyo.

A member of the Federation Council Olga Timofeeva said that the government of Japan is pursuing its own national interests, according to FAN.

“Statement on the return of the Islands of Japan are unacceptable. However, the situation must be resolved. Therefore, the statement that our President made, it is necessary for the realization of relations between Russia and Japan. You need to put an end to this issue. Vladimir Putin’s statement is logical and objective. How the situation will develop, will show time. If the Japanese government aims to cooperate with Russia, our conditions will be accepted”, — said Timofeeva.

Step sideways. That will give Russia a peace Treaty with Japan?

Senior researcher, Institute of Far Eastern studies Viktor Kuzenkov said that for Tokyo the issue of the South Kuril Islands is of paramount importance, and Japan is trying by all hook and crook to get to these Islands, reports of NSN.

“For us, the Kuril Islands is not the main issue, it is for the Japanese side, it is important, and they make every effort to resolve it. But, unfortunately, at the moment, one of those agreements that stated, began to run only 40%. And a country like Japan, in economic terms, could operate at a higher level. In such a situation it is very difficult to speak about good prospects of cooperation. [The Japanese] can be understood, but real cooperation yet. While the Japanese do not feel that it is profitable to cooperate with us, and will not do it for the sake of future political concessions, then something happens,” said Kuzminov.

Just a week before Putin’s proposal to sign a peace Treaty, the Japanese government formally protested to Russia because of the military activities of the Armed forces of the Russian Federation on the Islands of the southern Kurils. This was stated by the Secretary-General of the Cabinet of Ministers of Yoshihide Suga.News

World without the dollar: Putin invited the partners of the WEF calculations mnt

Caused the Japanese outrage maneuvers were associated with the anniversary of the end of the Second world war. Suga stressed that the increased military presence of Russia on the “four Northern Islands” of the Russian South Kuril Islands, is at odds with the position of the Japanese government. The politician added that a diplomatic protest was lodged through the Embassy of Japan in Moscow, stating that such events as “unacceptable”.

In early August, 2018 Japan protested the Russian side in connection with the information on the placement of fighters in the South Kuril Islands. As noted, the week before at the airport “Clear” on the island of Iturup began to bear its experimental combat duty crews multipurpose Russian su-35. According to Sugi, the opposition fighters on the island of Iturup, which claims to the Japanese side, was sent on 3 August to the Ministry of foreign Affairs of the Russian Federation.

Official representative of Russian foreign Ministry Maria Zakharova said that the deployment of su-35S to the island of Iturup is not aimed at destabilizing the situation in the region. She noted that the defense policy of Russia is not aggressive and is not intended to destabilize relations with Japan.

Japan, challenging the affiliation of the South Kuril Islands, refers to the bilateral Treatise about trade and borders, concluded between the Russian and Japanese empires in 1855.

The government of Japan, discussing the conclusion of a peace Treaty with the Soviet Union after the Second world war, put forward a condition on the return of the Islands, which the Kremlin has refused to sign the agreement. In the mid-1950s, the Soviet Union and Japan signed a joint Declaration in which the Russian authorities expressed willingness to consider the possibility of transfer of Japan two Islands in the case of concluding a peace Treaty. However, the Japanese government has gone on a principle and has not renounced claims to all the Islands.

the First results of the Eastern economic forum in Vladivostok

Not only vodka and pancakes with caviar.