7 Days (USA): Could it support life on Mars?

Only in the last few months, we learned about new evidence that Martian rocks have been preserved complex organic molecules. Each of these discoveries is another reason to look for extraterrestrial organisms on the surface of Mars, write “7 Days” (USA). Perhaps soon we find the first evidence that life exists not only on our planet? 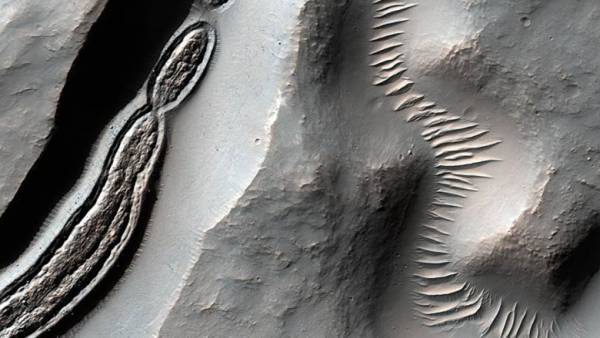 Only in the last few months, we learned about new evidence that Martian rocks have been preserved complex organic molecules, presumably necessary for life; that in the atmosphere of Mars are changing with every season variation methane; and under the surface of the planet has vast reserves of liquid water.

Each of these discoveries is another reason to look for extraterrestrial organisms on the surface of Mars. Perhaps soon we find the first evidence that life exists not only on our planet?

And although the signs of ancient alien life would be the incredible importance of discovery before us is an even bigger question: what value has Mars to the future?

Life on Mars: ray Bradbury predicted the future we avoided

Life on Mars… What would be news! However, it would be a mistake to assume that the discoveries of last summer mean that we’ll see something similar.

We must start with the fact that the history of Mars over the 4.6 billion years of complex and sad. Ancient Mars was a very different planet. In fact, Mars like the Earth. Its atmosphere is kept warm and protected by a magnetic field that was able to stop cosmic radiation and ultraviolet rays, and the surface of the planet almost certainly was full of huge water bodies that could support life in the form as we know it.

“Scientists agree that Mars probably resembled a typical summer Arctic day, says Natalie Cabrol, astrobiologist, NASA is actively engaged in the search for signs of alien life on Mars. — To exist, need energy, water, nutrients, shelter, and all that once was on Mars. If there was a time when I could Harbor life, it was the epoch of early Mars”.

But today Mars is quite different. Even in the most ideal conditions, for example, on a summer day, the temperature of Mars can reach about 70 degrees Fahrenheit.

But at night the temperature drops to below -100 degrees. Mars is not the atmosphere that would preserve the warmth and moderation of climate. And Mars has long since lost its magnetic field, which means that on the surface is radiation.

I always compare it with kitchen. On the table is the ingredients. Two people can blend these ingredients and get the same results. But if one of them is a great chef and the other a complete zero in cooking you’ll get two different dishes.Natalie Caprolactamate NASA

These two chefs — Earth and Mars, respectively. And although the world was able to cook all kinds of biological delicatessen, Mars was hardly able to make something edible.

Three months ago, the Rover “Curiosity” Martian equator came across a mountain with a height of three miles of the Gale crater, the valley of which, apparently, contained methane gas, a sign of primitive organic life.