The government has proposed to forbid them to post information about yourself. 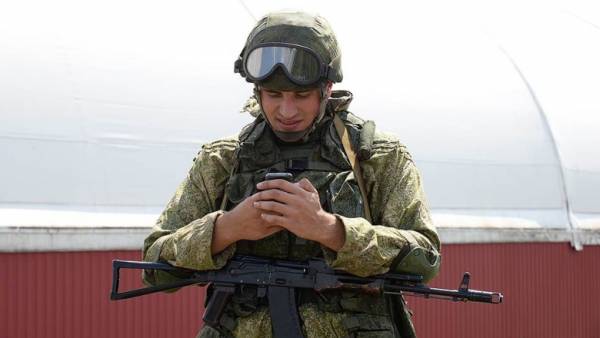 The government in the Duma introduced a bill prohibiting the military to share information about themselves and their colleagues on the Internet and the media. We are talking about the place of deployment of troops, departmental affiliation and other service activities. The expert says that the publication of such data occurs not only in Russia, and analogous measures are the military agencies of different countries.

In the explanatory note to the bill States that the government decided to develop it after analyzing the activities of the Russian armed forces in Syria. The military, the document says, are of “particular interest” to intelligence agencies of individual States, terrorist and extremist organizations, and the information in the Internet and media is used for “information and informational-psychological influence” and “for the formation of a biased assessment of the state policy of the Russian Federation”.

In the case of the bill the military will not be able to discover their departmental affiliation, to report their employment activities and other troops, military units, organizations and divisions in which the soldiers are serving, and the place of their dislocation.

In fact, punishment will follow for publications containing photos, videos, geotags, and other similar information. For the violation of the serviceman on the decision of the commander may be subject to disciplinary action. Contractor can be dismissed.

The explanatory note States that the rule is “a formal, precise, non-arbitrary application”, as it affects only the restriction on the distribution of information associated only with office activity.

Recall, the bill was developed by the Ministry of defence last year. In February, the division was sent calling to abandon social networks, leaflets and posters. Then, “Kommersant” reported that the defense Ministry plans to impose restrictions on the use of smart phones in the Central office and the army and go on a touch-tone phone (see “Kommersant” on 15 Feb).

The text of the bill clarifies that this refers to military personnel of foreign countries. Director of the Centre for strategic conjuncture Ivan Konovalov said that Russian troops could serve the foreigners, if they know Russian language and have no criminal record. The authors argue that the development of the draft law were taken into account foreign experience. “Recently, the United States was also a scandal when its members are lit in Syria. After that, the Pentagon banned soldiers to use applications with geolocation. It happens in many other countries,” — he said “Kommersant”.