Step to the side. That will give Russia a peace Treaty with Japan?

Russia proposed to Japan to sign a peace Treaty before the end of this year. 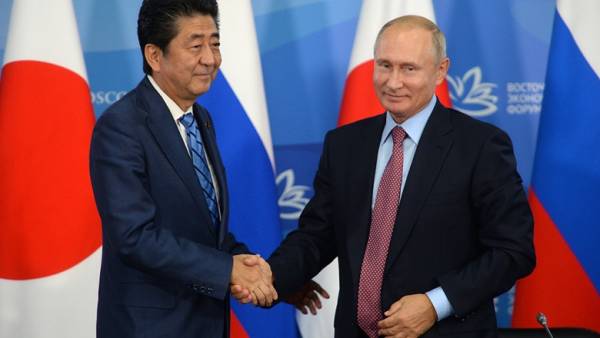 East economic forum the President of Russia Vladimir Putin has invited Prime Minister Shinzo Abe to sign a peace Treaty between the two countries before the end of the year without any conditions. For many years all negotiations and meetings of representatives of the two countries, was held in the absence of a signed peace Treaty after the Second world war. Moscow and Tokyo since 1945 cannot come to this agreement because of a dispute about the ownership of the four Kuril Islands — Iturup, Kunashir, Shikotan and Habomai, which became part of Russia in the Second world war.

In 1956 the USSR and Japan signed a Joint Declaration in which Moscow was ready to consider the possibility of transfer of Habomai and Shikotan after the conclusion of the peace agreement, as for the other two Islands, Kunashir and Iturup, they are in the Declaration was not considered.

Before the peace Treaty so it has not reached, all subsequent negotiations came to nothing lead, because Japan claimed the transfer of all four Islands.Is it possible the signing of the contract?

Since Japan today is not ready to change its traditional position in resolving territorial dispute, and the signing of a peace Treaty early to say, says researcher of Institute of world economy and international relations Christine Water. Under the peace Treaty, the Japanese and Russian sides understand quite different things, she says.

the Problem of concluding a peace Treaty between Russia and Japan

The Japanese position remains the same, it has not changed for a long time. Tokyo believes that a peace Treaty must precede the decision of the territorial dispute, with the transfer, return of all four Islands.

“Russia is such a position does not accept, referring to the 1956 Declaration, which included the possible transfer of two Islands — Shikotan and Habomai, as a gesture of goodwill, in the case of the signing of the peace Treaty, will. Despite the active work of the Japanese Prime Minister towards Russia, and the development of a trusting relationship between him and the President of Russia, any progress in this position was not done. So talking about the signing of the Treaty in the short term, given the current position of the Japanese side, probably prematurely. Now there are only talks on joint economic activities on the four Islands,” says the Water.

Russia wants a Treaty to establish closer economic relations. For a long time the Japanese authorities considered in relation to Russia, the principle of the indivisibility of politics and Economics as the main line. Now representatives of the two countries are actively discussing the possibility of joint economic activities on southern Kuriles. In the course of negotiations the parties agreed to organize the arrival of the third Japanese business mission to the Southern Kuril Islands.

The scope of legal activities is not yet defined. The Russian side said that Japanese investors have to work in the Islands under Russian law, but for the Japanese side, this means recognition of Russian sovereignty, and they still do not recognize. So the question is, how will you build these relationships of sovereignty, the parties have yet to decide.Christina Vodnany fellow, Institute of world economy and international relations RAS

Russia never put forward the time frame for the conclusion of a peace Treaty. However, the Japanese Prime Minister, who intends to be re-elected for a third term, said that the issue of ownership of the four Islands remains its main task on this post.

Japan recalled the conditions for the conclusion of a peace Treaty

“Today in Japan there is pressure on the Prime Minister, so he made the return of the Islands. September 20 in Japan, the election of Chairman of the liberal democratic party. This will be the third time for Abe. Him before the election should be possible to look good in front of an audience. What Putin said a key phrase for him, says more about the good relations between the leaders, and that Japan will continue to be active in the Russian direction. The upcoming talks are called negotiations for a peace agreement, but will continue to increase activity in other areas — humanitarian, economic, political that you can, of course, welcome,” says the Water.

According to doctor of historical Sciences, Professor, head of Department of Oriental studies, MGIMO-University Dmitry Streltsov, Russia really should not sign a peace Treaty at the end of the Second world war and the Treaty of peace and friendship, similar to that which Japan signed with China in 1978.

This contract provides for the obligations of the two parties on the development of relations based on the principles of peaceful coexistence, respect for sovereignty and territorial integrity, non-aggression, non-interference in the internal Affairs of each other.

“The peace Treaty is very important for the two countries as a fundamental document that will lay a strong legal basis for the further development of our relations. Of course, the absence of such agreement between the two countries which were enemies during the Second world war, is an abnormal phenomenon. But between our countries really need is not a peace Treaty, and a Treaty of peace and friendship, which would not be tied to the end of the Second world war. At the end of the war we have with Japan, there are no differences except for the question of the boundary. All other issues are resolved in the Declaration of 1956, according to which our countries have no mutual claims. As for the territorial issue, but now there are no signs that we will reach a compromise, and bring it all to the peace Treaty correctly. So we pour water on the hands of the Japanese side that argues that we have a territorial problem. I think there is a problem with crossing borders, that is border demarcation, which is not necessarily addressed through peace Treaty. But the framework of a large document, the Treaty of peace, friendship and good neighborliness we need. Until we have such a fundamental document not” — said Streltsov.