Last gold Empire: in Italy, found the treasure in millions of euros

The treasure of hundred gold coins worth several million euros was found by archaeologists during the execution of works in Como in Italy. According to scientists, the treasures were placed in a vessel and buried in the last years of the Roman Empire, that is over 1500 years ago. 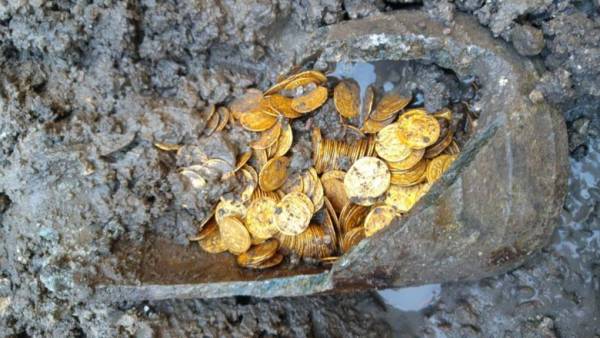 Simultaneously with the excavations of the medieval port city in Sweden, we found a lead stamp of the Flemish and Venetian coin of the XIV century. This discovery indicates the existence of stable trade relations between the Mediterranean and the Baltic in the late middle Ages.

The treasure of hundred gold coins of the era of the late Roman Empire discovered in the centre of Como. As reported on the website of the Ministry of cultural heritage, cultural activities and tourism of Italy in Facebook, the money was placed in a vessel of unusual form and belong to the fifth century of our era, that is was minted shortly before the fall of the major powers of the ancient world, which was, as you know, in the year 476.

Archaeologists made the find during excavations on the site of the works for the demolition of the former theater Cresson. According to the Minister of the Ministry Alberto Bonisoli, experts have yet to determine the true historical and cultural heritage values.

“This area is a real treasure of our archaeology, the official said. — Opening fills me with pride.”

After the necessary coins events will take place in one of the museums. Their value of coin is estimated at millions of euros. However, the exact price of the findings is difficult to call to the conclusions arrived at by the archaeologist Luca Rinaldi. He also noted the excellent condition of the artifacts that had lain in the earth more than 1500 years. The opening is unique for the size of purse: so many coins hidden in the same hiding place in these parts before.

Cresson theatre was opened in 1870, and later upgraded to display a movie. The closing took place 21 years ago. As planned by the authorities after demolition of the building is planned construction of luxury apartments. However, due to the discovery of a cache of the planned work will be suspended for an indefinite period. Archaeologists have insisted on carrying out large-scale excavations. It is not excluded that under the ruins of the theater hiding other treasures of Ancient Rome.

85 th Como is located near the Italian-Swiss border in the foothills of the Alps from lake Como shores. The settlement became part of the Roman Republic in the year 193 BC, during the Gallic campaigns of Julius Caesar in the 1st century BC it was moved to a modern location and has acquired strategic importance.

There is evidence that Caesar personally made a plan of the city with typical Roman tradition grid of perpendicular streets.