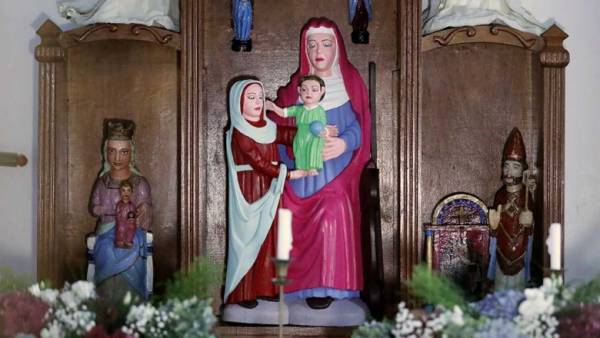 Parishioners of churches in Spain — people are creative and self-confident. Is not the first time they undertake the restoration of ancient icons and statues on their own. The result, I must say, it turns out is questionable, and the authorities continue to allocate huge sums to return the relics original appearance.

This is the best the best thing I read today, “I’m not a professional painter, but I’ve always enjoyed it, and these images really were in need of painting,” the shopkeeper, María Luisa Menéndez, told the newspaper.

Very few agreed with the shopkeeper.https://t.co/Hg9KqaRqqz

Another creative nature of the Spanish town of Rangatira named Mary Louise Menendez has already become famous in the media. A woman who is not a professional artist, but loves to draw, took up the restoration of a wooden sculpture of the XV century belonging to the local chapel.

According to Maria Luisa, the priest gave her his blessing that she brought the medieval figures in proper form. And she started to work with enthusiasm.

In the end, the figures of the Holy family, Saint Anne and Saint Peter’s began to look like the cartoon characters. Their faces shone with a pink tinge, and his clothing became bright neon colors.

Menendez said the Spanish reporters that the painted statues “as seen” and in the colors that it seemed appropriate. As noted by the woman, the congregation her work liked it.

But her efforts are not appreciated Association of art critics. They condemned restorer-lover and added, “mourn the continuous looting of the country”.

Note that in June in the Spanish city of Estella, the local teacher is also not very professionally painted medieval statue of St. George.