However it will not be a very strong class G2. 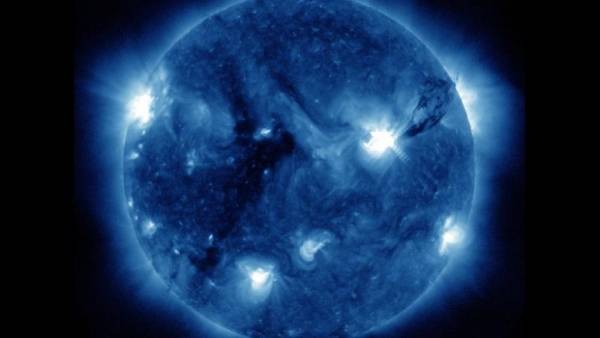 The office for national oceanic and atmospheric administration (The National Oceanic and Atmospheric Administration, NOAA) released a warning that the September 11 on our planet will happen geomagnetic storm class G2. In addition to problems with communication and the emergence of “superfluous” currents in long power transmission lines on pylons, the most notable effect of this phenomenon will be auroras at relatively low latitudes and the deterioration of the physical condition of millions of people, according to the NOAA website.

At the moment the Sun is in the middle of a low activity — this occurs in every 11-year solar cycle. Among the features of this period: the minimum number of sunspots and the small number of flashes, accompanied by the emission of particles from the surface of the disc. However, even in such moments our star can throw significant amounts of solar wind in the space surrounding it.

This phenomenon occurs in places where the temperature of the plasma in the solar corona is relatively low. In this case, the magnetic field lines coming from the sun, may not be fully closed, and the resulting “gaps” out of the plasma particles which are leaving the solar corona. If such a “hole” is opposite Land, then to break the particles of the solar wind reaches our planet.

According to scientists, this is precisely the situation on September 11, 2018, and soon particles of the solar wind, accelerated to 600 miles per second, collide with the magnetosphere of our planet.

The magnetosphere of the Earth is a “trap” for a large number of protons and electrons. However, when they hit the particles of the solar wind (mostly protons is the same), the portion of the particle “knocks” from the magnetosphere, and they fall into the ionosphere.

Unfortunately, it is not only the consequences of geomagnetic storms. Among the negative — disruption of shortwave radio communications in the high latitudes, the appearance in the uninsulated power lines and pipelines appreciable currents, as well as strong deterioration of health of many people (headaches, migraines, pressure drops). Fortunately, the “hole” on the Sun at this time was small, so the current geomagnetic storm is a class G2 (really powerful is the G5 or even G4).