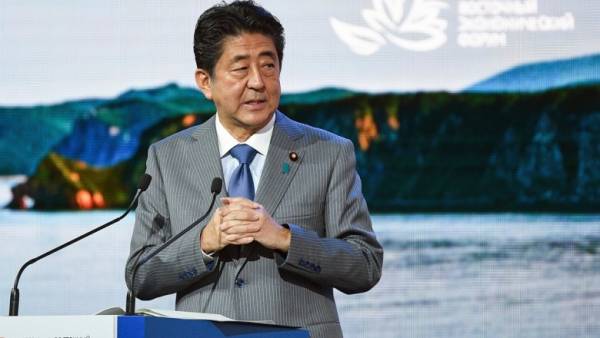 The Prime Minister of Japan Shinzo Abe confirmed the commitment to move together with Russian President Vladimir Putin to conclude a peace Treaty between Japan and Russia. The head of the Japanese government said Wednesday, speaking at the plenary session of the Eastern economic forum.

Vladimir, let us here renew our intentions before such a large audience as witnesses. Let’s go ahead by asking yourself these questions: “If not now, then when?” “If we do not do it, who besides us?Shinzo Abe Prime Minister of Japan

Abe admitted that the two leaders already know very well that to make it easy. “But we have a responsibility for future generations. We have a responsibility to completely remove from the North-East Asia the postwar landscape and change the future filling it with hope”, — said the head of the Japanese government.

Moscow and Tokyo many decades conducting consultations with the aim of developing a peace Treaty at the end of the Second world war. The main obstacle to this is the membership of the South part of the Kuril Islands: after the war, the entire archipelago was incorporated into the Soviet Union, but Tokyo disputes ownership of the Iturup, Kunashir, Shikotan and group of Islands, which in Japan is called Habomai. As repeatedly stated by the Russian foreign Ministry, the Russian sovereignty over them with appropriate international legal design, not subject to doubt.

Cooperation in the Kuril Islands

The joint economic activity on the South Kuril Islands leads to mutual trust and solving the problem of a peace Treaty between Japan and Russia, Abe Hotmail.

President Putin agreed that it is necessary to change our approaches [to the problem], so that our peoples have realized the importance of the need to solve the problem of a peace Treaty. It combines economic activity leads to the establishment of trust and the achievement of this goal.Shinzo Abe Prime Minister of Japan

The basis for the development of economic cooperation between the two countries was the eight-point plan proposed by Prime Minister Shinzo Abe in may 2016. The document implies the strengthening of relations in the energy sector, small and medium business, the industrialization of the Far East, expanding the export base. It includes a proposal to strengthen the cooperation in the field of advanced technologies, including nuclear energy, and humanitarian exchanges. As previously reported, more than 60 projects from over 130 developed in the framework of the plan, are already under active implementation.

The call to study and work in Japan

Abe turned to the Russian youth with the call to come to Japan to live there, to learn, to work together with the Japanese to create a new country of the future.