Putin and XI Jinping made pancakes

ISLAND RUSSIAN (Vladivostok), 11 Sep — RIA Novosti. Russian President Vladimir Putin and Chinese President XI Jinping at the end of the day after the talks at the WEF visited the exhibition “Streets of the Far East”, where the cooked pancakes with red and black caviar in the pavilion “Russian seafood and Russian market.” 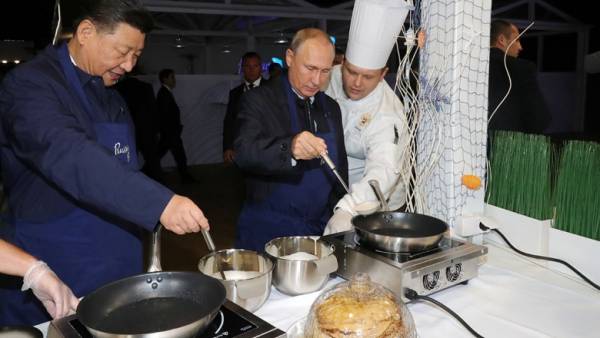 In the pavilion of the chefs invited Putin and XI Jinping to wear aprons and cook pancakes and then choose to fill them are presented at the exhibition seafood of the region.

Bake the pancake, the Russian President noted the high craftsmanship of the Chinese guest in this case.

“Yes, I have a tidy,” agreed XI through an interpreter.

Wrapped in cooked pancakes and black caviar, the two leaders tried their prepared foods: they ate and the Russian tradition on the proposal of Putin drank a little vodka.

The exhibition leaders spoke about the prospects of regional economic projects, for example, plans to build a plant waste-free production of fish processing, innovative a crab boat and others.

Oil, crab and chocolate: the trade of Russian regions with other countries

In the pavilion of start-UPS, young scientists showed the two heads of state the results of their work in the field of robotics, computer systems and others.

In addition to far Eastern regions and exposure of the Agency, the exhibition will feature pavilions of the Ministry, the Ministry of sport. For the first time within the exhibition planned for the international tournament on the game “go” is the main intellectual games Asia, which promotes cultural and business ties between Russia and APR countries.

Fourth Eastern economic forum will be held at the site of the far Eastern Federal University campus on the Russian island on September 11-13. MIA “Russia today” is the General information partner of the WEF.