The victory Sobyanin and second rounds in four regions. The results of the single voting day

In Russia on 9 September passed a single day of voting. Elections of the regional and local levels, as well as the elections to the state Duma was conducted in 80 of the 85 subjects. According to the CEC, these territories are home to about 65 million voters. Direct gubernatorial elections were held in 22 regions. The heads of Dagestan, Ingushetia, Nenets and Yamalo-Nenets Autonomous districts were elected legislative bodies at the proposal of the President of Russia. Elections to regional parliaments were held in 16 Russian regions. 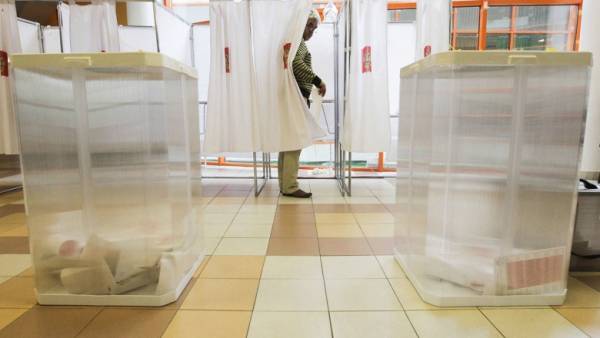 Summing up the results of the elections, the Chairman of the Central election Commission (CEC), Ella Pamfilova said that serious violations of the election except for a few cases in Buryatia is not fixed, she said. However, she said not everyone likes a “normal atmosphere for the elections”. Actively worked as a “Troll factory” said Pamfilova. “But we’re actively manage. It’s a good thing: it’s better to be fake than real violations,” she added. Voter turnout in gubernatorial elections in half of the 22 regions was higher than in past elections, said the Deputy Chairman of the Central electoral Commission Nikolay Bulaev. “In others it will be slightly different”, he argued.

In absolute numbers the mayor, according to preliminary data, has received this year, 200,000 more votes than in the elections in 2013

Polling stations in Moscow on 9 September were open until 22 hours. This year, Muscovites can vote outside of the capital, polling stations for truckers organized in Moscow, Kaluga, Vladimir and Tula regions.News

In Primorye, the acting Governor Andrei Tarasenko (United Russia), on the basis of counting 100% of protocols received 46,57% of the votes, the candidate from the Communist party Andrei Ishchenko scored 24, and 64% of the vote. Candidate for the Russian party of pensioners for social justice Julia Tolmachev voted 10,94% of the voters. The turnout in the region amounted to 30.24%. “Processed almost 100% of protocols of precinct election commissions. None of the candidates receives 50% of the vote, elections will be held in the second round,” — said the representative of regional election Committee Natalia Kamaeva (quoted by TASS).

The second round will take place not later than 21 days from the date of the first elections will be held in one of the closest Sunday, said Kamaeva.

The second round of the election for Governor with a high probability will be held in the Vladimir region. The acting Governor Svetlana Orlova (“United Russia”), on the basis of processing 100% of protocols received 36,42% of the vote. Its main rival — the candidate from LDPR Vladimir Sipyagin. He received the 31,19% of the vote. The candidate from “Fair Russia” Sergey Biryukov scored of 17.48% of the votes.

The current Governor of Khakassia Victor Zimin (“United Russia”) continues to lag behind that of the Deputy of city Council of Abakan Valentina Konovalova (CPRF). After processing nearly 100% of protocols Konovalov received 44,81% of the votes, Zimin — 32,31%.

In the legislative Assembly of the Irkutsk region will be elected by 45 members: 23 total regional district by party lists, was from seven parties, and 22 in single-mandate constituencies.

The Communist party is also leading in the elections in the Ulyanovsk Parliament of the sixth convocation. At the end of processing 99.5% of protocols, the Communists scored a 36.25% of the vote. “United Russia” received of 33.98% of the votes, the liberal democratic party — 13.5 percent, “Communists of Russia” — 5,82%. In the legislative Assembly of the region will elect 36 members: 18 in single-mandate constituencies, and another 18 — under party lists.

That “United Russia” for the first time in 10 years could lose the party vote, “Vedomosti” in mid-August, said several sources. In their opinion, the most problematic for the party can be the elections to the legislative Assembly of the Irkutsk region. The last time United Russia party lost the elections in 2007, then it happened in the Stavropol region. According to one of interlocutors, the main reason for pension reform to reduce the power ratings: “And breaks where the thinner is the Irkutsk oblast where the Governor [Sergey Levchenko] — first Secretary of regional Committee of the Communist party, a strong regional policies, which have controlled the legislative Assembly”.

The Prime Minister, the Chairman of “United Russia” Dmitry Medvedev in the evening of 9 September, called the good result of the party in the elections. “The party has performed consistently,” said he at a meeting in the Central office of the party’s regional offices. The Prime Minister noted that, according to preliminary data, United Russia retains leadership in almost all legislative bodies of those regions where elections were held.