Eugene Dietrich told the President the wrong statistics, but Maxim Oreshkin turned out to be “not aware” of the response of his Department on the proposal of the government. 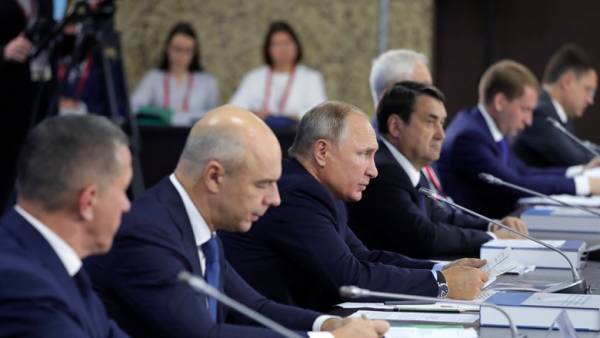 Vladimir Putin on 10 September held in Vladivostok a meeting of the Presidium of the state Council, where heads of the far Eastern regions of Russia, the Ministers and assistants of the head of state discussed problems of the Far East. In the middle of the meeting under fire from critics of President was recently appointed transport Minister Eugene Dietrich and the Minister of economic development Maxim Oreshkin.

When Putin gave the floor to Dietrich, he played more than 10 minutes and talked about problems of financing of air transportation, including to subsidise them at the Federal level.

Putin listened to the report and the first thing asked to be brief, and then stated that the Minister suggested that “not a very good idea.”

“I ask my colleagues [to be] short. Yes, I’m sorry, but we am going to sit. Second. I would like to ask you to focus on what has not been done. Third. With regard to extra money from excise taxes, which we had originally planned to invest. You can, of course, and through Federal Fund, but we agreed that the money from the regions will go directly. And so, using Federal Fund, you will collect and who will control how and where you send them? So I don’t think it’s a good idea,” said the President.

Putin then drew attention to the inconsistency of the available statistics on passenger transport the figures that led Dietrich: “Evgeny, you said there are a million transported passengers on a “flat” rates. I have other data in 2017 transported on flat rates of 530 thousand people. Forecast to 2018 — 900 thousand.”News

“Just a second, I will compare. I am sure that you have the most accurate data,” responded the Minister. “What, — said Putin. — Maybe here is the error…”.