In Smolensk prevented the explosion, prepared by the native of Dagestan. 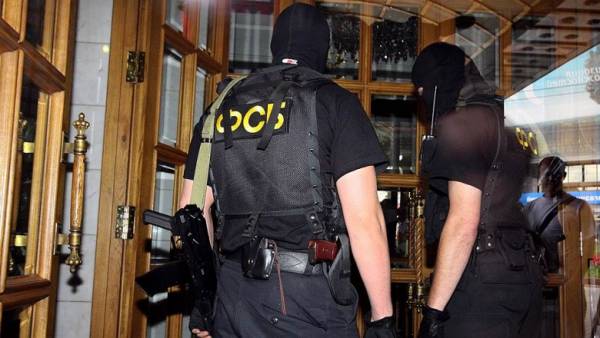 The staff of the office of the Federal security service (UFSB) across the Smolensk region have detained an alleged member of the banned terrorist organization “Islamic state”. According to the FSB, it is the job of the security Service of Ukraine (SBU) were preparing an attempt on one of the commanders of the self-proclaimed Donetsk national Republic (DND). SBU communication with the suspect deny. The battalion commander Sergei Fomchenkov, who allegedly wanted to blow up in Smolensk, was at this time in DNI.

Under version UFSB, 30-the summer native of Dagestan Magomedov medzhid had to organize an explosion in Smolensk, to eliminate a high-ranking soldier of the DNI.

During the search the FSB officers seized from the detainee a pistol with a silencer and a homemade explosive device with a capacity of 1,5 kg in a trotyl equivalent. In Smolensk Magomedov came from Ukraine in August. Weapons and explosives the suspect took from caches already in Smolensk, said the press service of the Ministry.

“On August 29 I arrived in the Smolensk region and rented an apartment. They (the organizers of the terrorist act.— “Kommersant”), I was thrown off the building and a photo of a man. I started going to study, and the reports sent to SBU Rustam. Plastids I had to improve under the explosives. I also had one PM with a silencer and two shops. If all is well I could, I had to come to the territory of Ukraine”, — admitted detainee during interrogation. In the network published a video of his arrest.

During the download an error has occurred.According to some, high-ranking military from the DNI, who is preparing to attack, is Sergei Fomchenkov — the commander of reconnaissance and assault battalion.

He is a native of Smolensk and during the holidays is often there. “B” sent a request to Sergey Fomchenkova. “Hardly, — he answered a question about whether able him to prepare an attack.— I really command the battalion in the Donbass, but I’m almost always in DND, in Smolensk are rarely”. We will remind, Fomchenkov — the husband of the activist of the National Bolshevik party (doesn’t exist anymore, since 2007, its activities are banned in Russia.— “B”) Taisia Osipova, convicted of an impact a bouquet of Smolensk Governor Viktor Maslov in September 2003.

The source “b” in the Ukrainian power structures believes that the statement of the FSB is an attempt “to justify the death of the leader of the DND Alexander Zakharchenko,” in which “convenient” to blame the Ukrainian side. He noted that the Ukrainian security forces actively oppose Islamic radicalism, and stressed that the detainee — a citizen of Russia. According to him, the Russian law enforcement bodies should “work more closely with their citizens, that they did not create the so-called caches of weapons”. The source in the SBU claims that the service has nothing to do with ISIS.