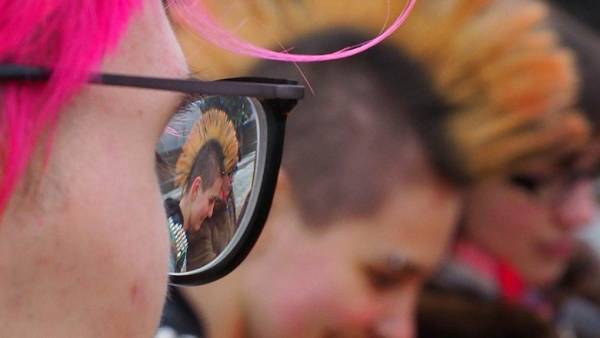 With the beginning of the school year in social networks began to appear about the conflicts of the schools and parents because of the color of hair students. In St. Petersburg the Director refused to put on the line the girl with blue hair, demanding to “correct the violation”. Perm school “was suspended from school” 15-year-old girl with pink hair. Her parents offered to take the girl on “individual training” that she could not “impact” on other students. The officials indicate that the school can record in the Charter the prohibition of hair — but has no right to refuse a child’s learning.

On how to the celebration at one of the schools of Saint-Petersburg not let a student with blue hair, said Commissioner for children’s rights in the region Svetlana Agapitova.

The children’s Ombudsman did not say in which school occurred in the case, but reminded that even in school if the Charter says a ban on bright color hair, the sanction for a violation can only be a comment or a conversation with the parents.

The head of the educational Department of the Committee for education of St. Petersburg Elena.

Spassky also said at the press conference that the leadership of the school has no right to prevent the occupation of the child because of the color of his hair. Mrs. Spassky said, however, that in each case requires an individual approach and outreach with students and parents.

About another story, reported in social networks, the Deputy of the Perm Duma from party “the Apple” Hope of Agisheva. She told me that her 15-year-old daughter was “suspended” by reason of “violations of the requirements to the appearance and clothing of students in high school”. Mrs. Agisheva posted a picture of the relevant order signed by the Director of the gymnasium № 4 named brothers Kamenskikh Tatyana Dyakova.