UN, September 7. /TASS/. The U.S. permanent representative to the UN, Nikki Haley accused Russia and Iran of intent to strike in Idlib civilians that oppose President Bashar al-Assad. This opinion was expressed, speaking Friday at a meeting of the UN Security Council in Idlib. 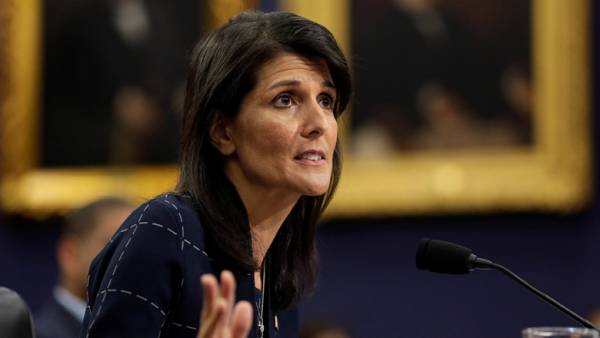 “When Russia and the Assad regime say they want to fight terrorism, in actual fact they mean that they want to bomb schools, houses, hospitals, they want to punish the civilian population, which showed courage and rebelled against Assad. When the regime calls the brave “White helmets” terrorists, we know they are not serious about fighting terrorism,” said Haley.

“The United States is deeply concerned about the presence of terrorists in Idlib, she added. — There are many ways to effectively attack these groups, without achieving a humanitarian catastrophe”.

Idlib — the only major region of Syria, which remains in the hands of illegal armed groups. In 2017, there was created the Northern area of de-escalation, which could move the fighters with families who refused to reconcile and voluntarily lay down their arms.