The ISS has leaked: where “Roscosmos” is looking for the guilty

The ISS 30 Aug leaked air. Meteor attack? Alas, the reason most likely was the human factor. 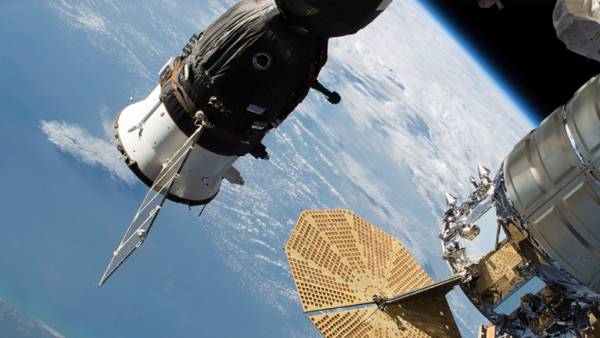 The sensor that reports the pressure drop on the International space station worked, when everyone was asleep. Since 30 August 2018 astronauts learned about the depressurization of the station. Judging by the rate of pressure drop, they have only had four days until the evacuation. In the most rapid pace began to search for air leaks. And “Roscosmos” on Earth — to find the causes of the incident and the perpetrators.

To locate air leak was used the elimination method: alternately sealed compartments and checked, stopped if the pressure drop. After etching has been found compartment — it was a manned spacecraft “Soyuz MS-09” — began a careful inspection. To clarify the place uses a special ultrasonic sensor: the air coming out of cracks in the high-frequency whistle which is not audible to the human ear. But with the help of a sensor can quickly and accurately localize the site of injury.

Came across the hole German astronaut Alexander Gerst. During the inspection, the astronauts began to understand the cause of failure: “13:00 Oleg Artemyev: the impression that someone with a drill I drilled the hole through. No, it’s not a hole.” (Roskosmos denied access to the transcript, a copy of which is available here) the Earth is more insisted on the version of the micrometeoroid, but, alas, without variants. Could the micrometeoroid to make a hole in the shielding and the inner hull of a ship?

Of course, they could — in may 2016 tiny micrometeoroid left a crack, a track with a diameter of 7 millimeters, the illuminator module “Cupola” of the International space station. The reason for the huge speed of the ISS (7.7 kilometers per second), which turns any counter object in an extremely dangerous.

But in this case all members of the crew were clear of the man-made nature of the hole. And rescued the crew of a thin, about 0.5 mm, protivometeoritnoy protection. The lining of the spacecraft “Soyuz” has a thickness of about 1.5 — 2.0 millimeters.

Sergey Prokopiev: “the surface drilling. If you’d put a drill such a hole and the traces will be.”Alexander Gerst: “It looks like a drilled hole and remnants of metal from the drill”.Leaked information in the “Roskosmos”

However, on Earth decided found a hole to call it a fracture from a micrometeor. Only after the “RIA Novosti” with reference to anonymous sources wrote that the hole was made by a drill, and most likely during Assembly of the spacecraft on the Ground, in RSC “Energia” began to discuss this version.

On the evening of your comments was given by the head of the Roscosmos, Dmitry Rogozin. He agreed that it was not a meteorite, as the hole is done from the inside. Rogozin partially confirmed the story of the would-svalilsya, but it gave TASS another, is totally conspiracy theories: “But to say that it was in fact, still early. One can say that the impact was uncertain hand… it’s just some kind of technological error some specialist, the impact was hand, there is a sliding drill on the surface. We no version not reject”.

The head space of the Corporation added that the test “earthly” version, but it is not swept aside and “the deliberate exposure in space.”

It would seem that what the astronauts to cut the branch on which they sit, or rather, drilling her to the station? Oil poured into the fire, a former astronaut and now a state Duma Deputy Maxim Suraev, suggesting the presence on the ISS mentally unstable astronaut in space

We are all real people, all may want to go home, but this method is quite unworthy. If it did, the astronaut, and this cannot be excluded, it is not okay. So, not running the filter which worked on the Land. There was a severe psychological selection, were psychologists whose findings are very significant. Now the level of this service has declined slightly.

Which version is closer to reality: a damaged spacecraft on Earth by mistake, or the presence at the station crazy astronaut-saboteur with a drill?

Let’s start with the International space station. Sent there passed a multistage selection of the most adequate and psychologically stable people. Yes, there is always the chance for a psychological breakdown. Moreover in the history once it has happened. In the summer of 1973, the three American astronauts of the orbital station “Skylab”, tired of the demanding flight task, staged a mutiny in orbit, a whole day of doing nothing and enjoying your vacation.

After that, NASA has greatly changed as the process of psychological preparation and basis of preparation of flight assignments. In addition, the astronauts did not break the station: they just rested.

In addition, the ISS is quite quiet, you can hear only the humming of the fans. Therefore, such work as drilling holes, it is impossible to produce without having to know the rest of the crew. Although the drill there is — this is undeniable.

What about problems in the Assembly? Maybe that never happened? Alas, it is not. In January 2017 Russia temporarily remained without the main boosters. Had to check all the engines, made at the Voronezh mechanical plant: they are used as in “Unions” and “Protons”.