Merkel supported the actions of the Russian army in Syria

The military should try to ensure the safety of civilians in the fight against terrorists, said the Chancellor of Germany. 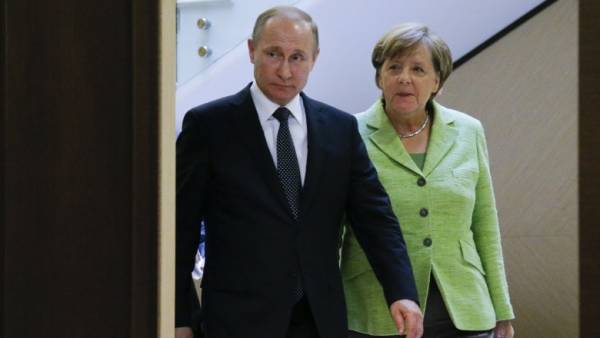 The Syrian army and its supporting forces of Russia should fight insurgents and terrorists in Idlib province, said German Chancellor Angela Merkel. She noted that the military must try to ensure the safety of civilians and to avoid a humanitarian disaster, but to stop this fight against the radicals is impossible.

“The fight against these radical forces must continue, including for the protection of the civilian population. We must avoid a humanitarian catastrophe”, — said the Chancellor in an interview with RTL. She noted that “seriously discussed” the question of the liberation of Idlib with Russian President Vladimir Putin and President of Turkey Recep Tayyip Erdogan.

Operations of Russia and Syria against terrorists in the past was complicated by the fact that the opposition and the militants used civilians as human shields, shifting the zone of conflict in populated areas. Now in Idlib this situation, and the radical act of destruction, to disrupt the plans and the movement of the army of the Assad government, writes Deutsche Wirtschafts Nachrichten.

“let’s commit troops. Let’s kill, fuck, as much as possible”

U.S. Secretary of state Mike Pompeo September 5, expressed Washington’s support for the actions of the Russian army in Idlib, speaking of videoconferencing carried out the bombing of terrorist positions. According to him, the United States recognizes the presence of terrorists in the occupied opposition of the province and I fully agree with Moscow’s plans to destroy the stronghold of radical groups. The official also reminded that Idlib is considered a zone de-escalate the conflict and urged the Syrian army to protect civilians in the region from violence.

Earlier, foreign Minister of France Jean-Yves Le Drian said that to solve the problem of Idlib, which is under the control of the terrorists and the armed opposition, the Assad government required political means instead of military. The diplomat expressed the opinion that the possible battle for Idlib could be the most bloody in the history of the Syrian conflict, and urged the participants of the Astana group (Russia, Iran and Turkey) to avoid this battle.

The foreign Minister of Russia Sergey Lavrov and Minister of foreign Affairs of Iran Javad Zarif spoke in a different tone, calling for the elimination of terrorists in Idlib as soon as possible. According to them, occupying the province, the militants continue to attack the positions of Syrian troops, and oppressed civilian population of the region. “From all points of view, the abscess should be eliminated”, — concluded Lavrov.

The civil war in Syria began in 2011. The fighting involved government forces, the opposition, the militants of the “Islamic state” (banned in Russia) and other terrorist groups. According to various estimates, for seven years, died from 360 to 470 thousand people. Millions of Syrians have become refugees.