The town without children

The correspondent of “Kommersant” was in Armenian. 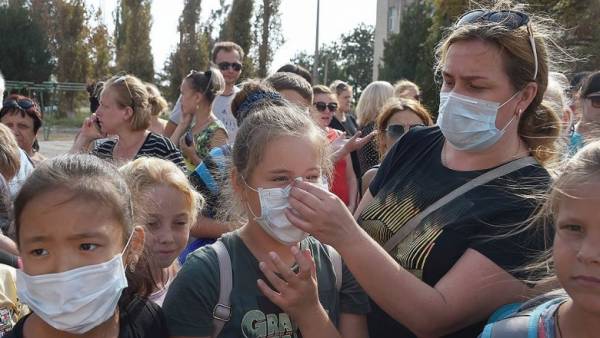 For the day of 25 th of Armyansk have taken more than 4 thousand children in the city almost does not remain pupils and kindergartners. Their two weeks were sent to health resorts on the Black sea coast. The following Armyansk can leave children under three and their mothers, and pregnant women. We will remind, in the town of Armyansk in Northern Crimea there was an emission in atmosphere of harmful chemical substances. In air samples September 4, was detected exceeding the limit content of sulphur dioxide. The Republican authorities claim that there is no danger to human health in the city. The operation of the plant “Titan” decided to stop the cause of the emissions is called kislotostabilen enterprise in which the evaporated water and to evaporate the acid. “Kommersant” talked with residents of Armiansk and Perekop neighboring village and find out how they live in the city without children, but with sulfur dioxide.

In Krasnoperekopsk, which is located 20-25 km from the plant “Titan”, it’s still summer: along the road are green trees, around flowers. In Armyansk, it seems, autumn has suddenly and prematurely.

The leaves turned yellow. Orange tint bought even some coniferous trees. On the streets almost no people.

Go meet the buses at six in the column. Each convoy was escorted by two cars of traffic police. In a press-service of the Ministry of education of the Crimea, “Kommersant” was told that eve was taken out of town more than 2.8 thousand local schoolchildren — students 2-11th grades. Children were taken to sanatorium Evpatoria, Saki and Bakhchisarai area where they will stay for the next two weeks. Buses for them was provided by the sue “Chernomorneftegaz”, the firm “Eupatrids” and a few other carriers.

The education Ministry stressed that the departure was voluntary: about 20% of parents of pupils in the camp were not released.

5 Sep from Armyansk taken 1184 child with their mothers (total population of the city, according to 2014, is about 22 thousand people).

Local resident Lyudmila Voloshina his son, second-grader decided to leave the house. “My husband is disabled and another child a year and a month. Decided that if we go, only everything,” the woman said. According to her, emissions near Armyansk on her health not affected: “Well, it was hard to breathe in the morning last Friday and Saturday. And so nothing special.”

Her neighbor Sergey Frolov said that the emission of harmful substances into the atmosphere have learned from the Internet.

“A couple of weeks ago it was — says a resident of Armyansk.— Handles on furniture, metal turned green, the kettle rusty. Came out into the street: the car was covered with something orange-yellow, washed. A couple of days later in the news I read”.

Sergey Frolov believes that in Armyansk nothing terrible had happened: “more panic”. But two kids in school on 4 September he was sent to children’s camp “Druzhba”.

A very different mood prevails in the village of Perekop, which is located closest to the plant “Titan” and kislotostabilen.

Before the eyes of a picture from a movie about post-Apocalypse: the trees are missing leaves, grass rusty color. The air smells like someone was constantly burning matches. Mouth quickly there is a metallic taste, and on his lips the bitterness.

Above the village smoke pipe “Titanium”. The plant decided to close September 4, but he appears gradually. “We are planning to stop the production process. Five of the eight furnaces still in operation, by September 8, stops another oven, remain in operation four, 9 Sep stop all furnaces”, — said the Director of “Titan” Andrey Akulov at the meeting of the operational headquarters on liquidation of consequences of the chemical spill in Armyansk, which was chaired by the head of the Crimea Sergey Aksenov.

Many residents of Perekop (population about 900) are working on “Titan”. One of the employees of factory, Valentina Anatolevna, told “Kommersant” that the first releases from local residents noticed on August 23. She’s in the garden turned yellow and leaves fell off the apricot trees. Then rusty grape leaves. Berries the woman had collected and dumped: Yes she is afraid of them. Every day Valentina Anatolevna washes metal fence and gate. But even during the day they are covered with an oily liquid that looks like used engine oil. In the same oil covered the woman’s home and even the pipes under the sink in the kitchen. “It is impossible to breathe for two weeks. We work in a factory, went fresh air to breathe,” says the woman.