All paid for the next three years

The budget projections now look confident even with cheap oil. 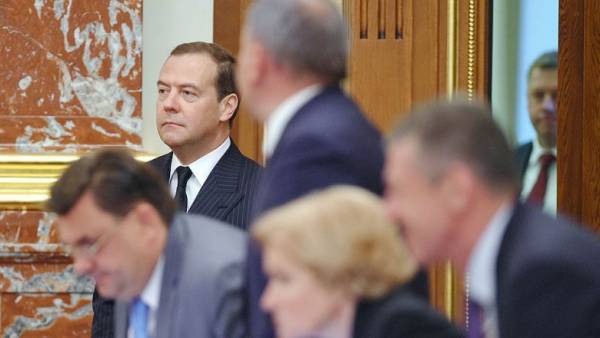 The main provisions of the budget construction for 2019-2021 years, approved the budget Commission of the government — in fact, a surplus budget balance already in 2018, the stability of spending on the pension system, an additional 8.5 trillion rubles from the national welfare Fund (NWF), a balanced regional budgets with shrinking in real terms Federal transfers, priority of public investment in transport infrastructure and the estimated price of oil falling to $58/barrel by 2021. The main question is why the White house had in this situation to increase VAT and to reduce the growth rate of GDP in 2019, remains unanswered: the Russian economy is in such a construction budget sustains aggregate tax benefits, the Finance Ministry estimated, components of 3.2 trillion roubles a year.

“B” became available proceedings of the meeting of the government Commission on budget estimates, yesterday, September 5. This is the main meeting of the Commission, it was submitted to the Ministry of economy forecast of socio-economic development of the Russian Federation until 2024, the Basic directions budgetary, tax and customs tariff policy of the Ministry of Finance, calculations of the Ministry of labor and Ministry of health on the parameters of the budget funds. In the documents of the Ministry of Finance and economy provides the first data on the revenues and expenditures of the budget system, including the regions they have taken into account the decision to raise the retirement age and VAT from 2019, the cost of projects, a number of other fundamental decisions relating to the business (for example, the inclusion of norms for best available technologies and 2019-2020), principally from these figures, the draft budget, which will appear in the White house in September, will not differ.

We will note, growth of 1.3% in 2019, projected economy — it’s largely the result of growth in the tax burden following the increase in VAT from 18% to 20%: construction budget all more apparent the lack of any need in this decision.

Note, in the “Main directions” of the Ministry of Finance calculated the total cost of “tax expenditures” (a de facto tax privileges and preferences) for the economy: it is 3.1 trillion in 2019 and 3.3 trillion for 2021, of which more than half accounted for the VAT exemption, and another third to the energy sector. Why in such a situation, you need tax increases, is already absolutely not clear, we are talking about 0.5% of GDP additional taxation is additional income roughly in half from internal and external VAT, but consider that part of the growth of foreign VAT accounts for investment imports.

Another unpopular decision — raising the retirement age — in the budget for the 2019-2021 years are taken into account and any financial benefits the budget does not bring. The transfer to the Pension Fund in 2019 and 3.4 trillion in 2021 — a 3.35 trillion rubles, while the Federal sponsorship of pension insurance from 2019 to 2021 is reduced from RUB 1.1 trillion to RUB 0.9 trillion social security Funds and CBOs almost balanced, with expenditure on new protocols of cancer care (70 billion rubles in 2019, 120 billion in 2020 and 140 billion — in 2021-m) coming out for the system, but part of the cost of cardinaleway included in base program OMS, and the cost of high-tech medical care out of tariff OMS are growing significantly.

Especially striking in the description of the documents of the Ministry of Finance and economy, the situation with the regional budgets. Their consolidated deficit does not exceed 0.1%, own incomes are growing at 4-5% per year, the size of the Federal subsidy falls as a share of GDP from 1.7% in 2019 to 1.4% in 2021-m, and in nominal terms is actually stable.

Finally, money for priority projects in the budget, obviously enough. According to “Kommersant”, at the beginning of September, the situation with the national projects is still far from normal, in fact, the White house only approved social projects and limits for all the 13 programs (including infrastructure), but most of the specific additional costs (included in basic budget for 2018-2020 and not fundamentally change) project, essentially, not painted. According to the Ministry of Finance, the decision on consolidation of a number of spending projects, it will also force the White house to spend some time in revision. In the documents for the meeting of September 5, and contains a curious reference relating to the order by whose instructions and decisions in the budget for the 2019-2021 years are the overheads. According to decisions of Prime Minister Dmitry Medvedev’s decision to 1.2−1.3 trillion a year, according to the decisions of President Vladimir Putin — 0.36 to 0.39 trillion rubles a year, by decision of the Presidium of the Council for strategic development under the President — in the range of 0.68−0,78 trillion a year.

In this case, when all budgetary and economic stability (so, economy in the forecast focuses on the stability of the ruble at 64 rubles/$ the next three years, and the growth rate to 67 rubles/$ by 2025) in the next three years based on budget projections, the country will face a rather slow and uncertain growth and the gradual accumulation. The macro stability will be preserved: for example, the economic Ministry expects inflation in 2019 4.3% (from peak to 5% year-on-year in January), 3.7% in 2020 and 4% in 2021-m.

The main ideas included in the budget in these conditions, a significant increase in savings rate and investment growth, that is what informed the government of the economy was achieved with difficulty or could not achieve.

According to the forecast of the Ministry of economy, the forecast of weak GDP growth for the year 2019 reflects the need for “adaptation” of the economy not only to the new VAT, but also to the gradual effect of the projects, and to volatility in the markets. Investments in these circumstances, the conservative approach to public investment must grow by 6.1% to 2024: calculations of the Ministry of economy, this growth must be ensured by the inflow of capital in the construction (including power mortgage boom), transport (including through development Fund), food industry, mechanical engineering, pharmaceuticals and chemistry, as well as in IT. Gross capital formation thus in 2019 will even decrease by 1% (in 2018 increased by 0.5%) with a further rise to 3% in 2020 and above in 2021-2024. Will drop in 2019 and the share in GDP of public administration, military security and social spending, but less than in 2018, and in the future it will continue to decline. The second factor is the expected increase of relief in the labour market by increasing the retirement age: it will ensure the growth of employment in the economy on 137 thousand in 2019 and 1.8 million by 2024 and will contribute to the GDP growth contribution of 0.2−0.3 p. p. Change in the retirement age, on this basis, it justified the short-term growth rather than short-term savings. Third and also not advertised factor — limitation of expenditure for the tariff services of state monopolies: they have until 2021 will continue to grow below inflation.

In 2018 these factors, coupled with expensive oil worked for the government. It remains to find out if it will work the same as this year, and, according to the plans of the Ministry of Finance and economy, much better for three, and even six years.