Due to the Typhoon in Japan canceled more than 600 flights

Moscow. September 4. INTERFAX.RU More than 600 domestic flights cancelled in Japan due to an approaching on the West coast of Typhoon Jebi, said on Tuesday the Agency Associated Press. 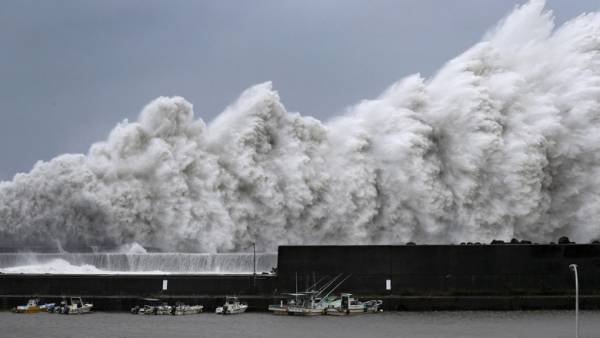 It is expected that in the coming hours the hurricane will reach the coast of Honshu. Meteorologists reported that wind speed at the epicenter is 160 km per hour with gusts up to 215 km per hour. On the coast is already hit by heavy rains and Gale-force winds, predicted wave height can reach 12 meters.

Typhoon #Jebi is making landfall in #Japan, bringing damaging winds, torrential rain, stormy seas and the risk of coastal flooding. There’s recently been a 92 mph gust at Nankishirahama Airport on the south coast of Honshu pic.twitter.com/SBhsEHJIwm

Suspended the movement of trains between Hiroshima and Osaka, and also Osaka closed the Consulate General of the United States and Universal Studios.

The country’s Prime Minister Shinzo Abe has canceled a planned trip to the southernmost island of the Japanese archipelago Kyushu in order to personally lead the fight against the elements.