The Communist party, organized September 2, nationwide protest against raising the retirement age, said the number of participants of meeting in Novosibirsk. 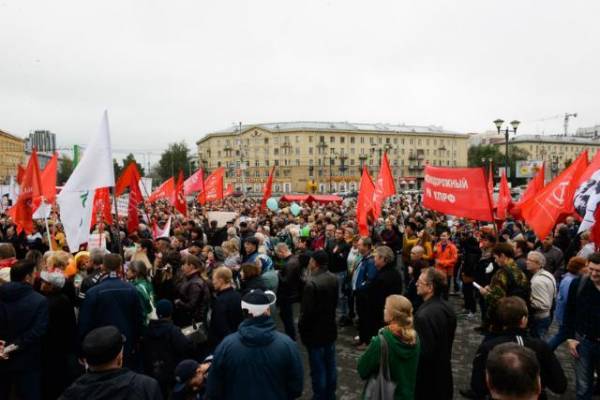 According to the regional branch of the party on the square in front of the library came 4 thousand people. Similar rallies were held in Gorno-Altaysk, Barnaul, Biysk, Irkutsk, Novokuznetsk, Omsk, Tomsk and many other Siberian cities.

“Among the protesters as the current pensioners, and those who are just approaching retirement age youth. Many came to the protest with their families together with small children”, — said the organizers of the protest.

In addition to the Communist party, it was attended by other political forces on the left, and “Apple” and “Democratic choice”. Activists succeeded each other on the stage, they all said that after the President’s address to the nation there is no doubt that pension reform will not stop.

“We have the money to raise pensions and raise the retirement age. But they are all in the pockets of the oligarchs. Today, about $ 270 billion are in the pockets of 25 families. Today, a huge gap between rich and poor in our country, even Central Africa, such a break never dreamed of. Maybe that’s where to find the money for retirees?” — asked the Deputy of the state Duma Vera Hansa.

By the way, the opposition coalition was invited to the meeting and deputies of the state Duma from the Novosibirsk region, which had supported raising the retirement age, but they are on the stage were not observed.

Another series of protest actions should pass in Russia on the eve of a crucial vote on the bill in the state Duma on 22 September.