The first one in Africa

Dmitry Kosyrev is about the development of the Black continent in Chinese. 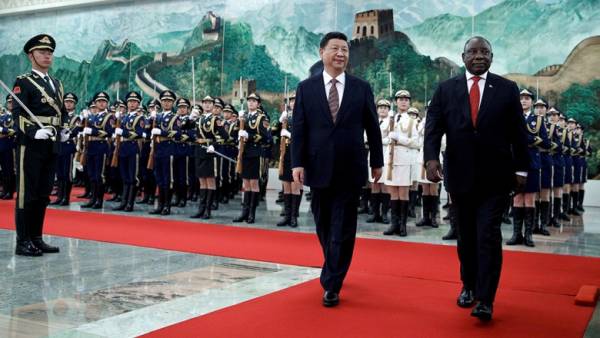 The Chinese have once again tried to show that part of the forums they are equal in the world. In Beijing went to the leaders of virtually all of Africa (over 50 States), at the next summit FOCAС — a cooperation forum of China and the dark continent (3-4 September).

Any forum is the celebration of statistics, which in normal circumstances is difficult to collect. In the local media long is a roll call of ambassadors of Beijing in different countries of Africa with experts, which lists all the achievements by now for part of the integrated development of Africa by China. The picture is more than impressive, here are some stories.

How to live in the most dangerous country in Africa

In Djibouti, a small country in the horn of Africa in July, has opened an international free trade zone. More than 48 square miles where earned production, retail duty-free trade, warehouses and banks. The zone pulled up the road from neighbouring Ethiopia, nicknamed “the Iron dragon”. Not only that, the journey from Addis Ababa is now 4 hours instead of 18 (bus) while in the Ethiopian capital appeared first in Africa, the system ground station.

In Ghana, the specialty of Beijing education. Currently in China studying 6500 Ghanaian students of different levels, more than any other countries on the continent. 1076 of them on scholarships from the Chinese government. And in the country, China is organizing, in fact, create a whole educational industry with several universities headed.

In Guinea, the picture is different: here, the Chinese began with the outbreak of the Ebola epidemic in 2014-2015. It’s not only about the package of medicines and assistance in the country worked and risked their lives — Chinese doctors and other professionals. Then somehow by itself it turned out that of the 10 of thousands of African villages that — for the commitments of Beijing have in the near future to satellite TV, 333 were already Guinea. And since television needs, among other things, electricity, it naturally looks hydroelectric power plant in Caleta near the capital, Conakry, also built by the Chinese.

Though there is a power “of Chinese origin” and more, such as Karume in Uganda 4 billion kilowatts per year, which in addition to electricity gives $ 200 million a year in revenue for the government and 6 thousands of locals plus a handful of experts from China…

Countries in Africa, we recall, more than fifty (the number is a quarter of the world), and almost all of them have something made by the Chinese. But even on the above “individual cases” you can see the total system. For example, it all began with local experiments, each country was a laboratory for some of the industry — to whom that is more necessary. Then the neighbors appraised this experience and asked myself something similar or, on the contrary, specific to that nation (in impoverished Malawi, for example, it proved to be quite successful export of textile production).

And finally today, at a forum in Beijing, we see a logical system already on a continental scale, as described in the development plans. The road is not favorable to one country and a connect, in addition, the production appears to get a sensible supply logistics and so on. Note that, although China is constantly putting someone in Africa using the whole system operates together with profit for the Chinese side including. And the benefits to all are clear and known, it is being discussed and adjusted.

The overall picture looks like this: grant aid to Africa China has issued amounting to 75 billion dollars, and made investments of about 100 billion — more than anyone in the world. At the same time we see that the Asian giant from 2009, the main partner of African countries in the field of trade. The turnover is about to exceed 200 billion — are waiting for fresh data from the Beijing forum. Thanks to the Chinese investments in Africa are now working or under construction 100 industrial parks, produced or soon will produce cars and trucks, refrigerators, TVs and more. In other words, there was something that could pay for Chinese loans. And the process goes on increasing, is reduced to the integration into a common global system.

African China’s success seems sudden. But the logic in it, and not just because engagement started working in the 70-ies and has not been interrupted. The fact that Africa is neutral, unlike different parts of Asia.

It would seem that here the partnership with the great neighbor looks more natural. However, any neighboring countries around the world have to each other some ancient historical accounts, including “territorial issues”. And these scores right now, when China began to try on the title of the first economy in the world, are accidentally dragged to the surface. That’s at least Vietnam, it is now evident in Southeast Asia on the part of the anti-Chinese statements. Do not forget that in every country of Southeast Asia is a powerful business team, ethnic Chinese, and they, of course, lead in the development of trade with the historical homeland. But there are purely local residents that this situation is not always like that. A separate story that is happening now in South Asia, as India and her neighbors, who… more closer to China. But this creates a conflict with India that inhibits or politicized to the limit many economically beneficial projects.

And with Africa have nothing, but there is a repeatedly proven in action the principle of Chinese foreign policy: Beijing does not climb in the internal Affairs of other countries, does not teach democracy, or of autocracy, or something else.

The result is a really big phenomenon — something that has not turned out the colonialists of the West, or Communist Moscow, came from the Chinese.