During a country visit, the farmer from Greece stumbled upon a strange hole in the ground, which turned the entrance to the tomb of age 3,400 years! 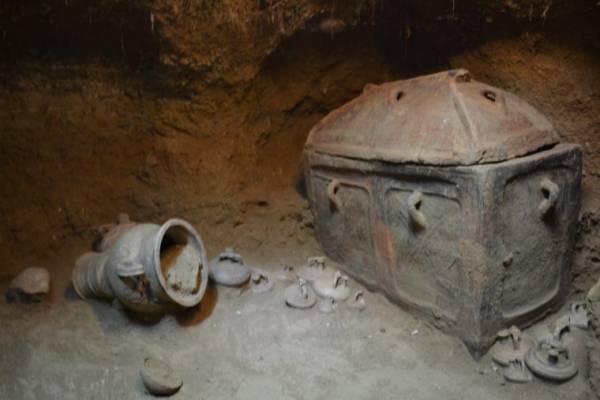 The portal of the newspaper Cretapost there was one funny story. The Greek farmer, who decided to Park in the shade of an olive tree, suddenly noticed that the car literally sinks into the ground. According to him, under the wheels suddenly opened a hole diameter of about 1.2 meters. When he looked into the resulting cavity, then immediately realized that I had stumbled onto something interesting.

Suspecting that strange crack in the earth may be somehow connected with the historical ruins, the farmer turned in Lassithi Ephorate of Antiquities — the local organization responsible for the retrieval and preservation of ancient heritage in the region. Upon arrival, a team of archaeologists has confirmed the assumptions of the landowner. He actually accidentally unleashed a layer of earth on the tomb, which experts attribute to the so-called “posledicama” stage of the period of the Minoan civilization.

Inside was found a couple of coffins, in each of which the researchers found one skeleton. In addition, the tomb was found two dozen clay pots with colorful ornaments and posthumous offerings, which served as a kind of marker for historians. “In accordance with the typology of the ceramics, it can be argued that the tomb belongs to the Minoan period IIIA-B, that is, it was built around 1400 — 1200 BC”, explain the experts of the organization in a press release. The grave is located near the village of Kentri, in the South-East of Crete. As it turned out, the tube of the irrigation system and entering the water podmilj the soil, which led to the collapse.

Archaeologists tell us also that the tomb consists of three sections, separated by limestone slabs. Surprisingly, burial, located at a depth of only 2.5 meters under the surface of the earth, for 3400 years never disturbed by looters. Masonry, sealing the entrance remained sealed for all these years — this explains the excellent preservation of the contents of the tombs.

The sarcophagi also represent a particular value. This so-called Larnaca is characteristic for the Minoan culture a closed casket, in which was placed the dead body or the ashes after cremation. They are made of ceramic and resemble wooden caskets. Larnaca usually much shorter than the body of the deceased, because the bodies were usually placed inside in the fetal position.