As Lydia Timashuk used in the “case of doctors”

Just a few weeks easy the doctor was the official hero, like Pavlik Morozov, and then for many years a symbol of villainy, squealing and rabid anti-Semitism. Who was Lydia Timashuk, really?

70 years ago, on August 31, 1948, died Andrei Zhdanov, at the time the person № 2 in the Soviet leadership, friend of Stalin (his son George was married to Svetlana Alliluyeva).

Today he is remembered mainly thanks to the custard cake, which, according to several testimonies, made him in specimene when he was head of the Leningrad blockade, and organized them with post-war persecution of intellectuals, known in history as zhdanovschyna.

He, as recalled Alliluyeva, especially strongly, to shiver, afraid of Stalin. Probably including and so died of a heart attack at the age of 52 years.

The name of the doctor Lydia Timashuk Fedoseevna became a symbol of Soviet patriotism, vigilance, uncompromising, courageous fight against the enemies of our country. She helped to pull the mask off American mercenaries, monsters that used the white coat of a doctor for killing Soviet people.”Truth”, February 1953

After four and a half years the death of Zhdanov backfired “deal killers in white coats”. According to a contemporary journalist and writer Alexander Nikonov, hillbilly aunt in the 1990-ies were repeated heard in youth movies like Jewish doctors under the guise of vaccinations do Russian babies lethal injections, and somehow in the EMP.

The most famous figure of this case is a cardiologist Lydia Timashuk, from whose letters with accusations against Zhdanov professors treated all supposedly began.

January 20, 1953, she was awarded the order of Lenin, and on 3 April took it away. Within weeks she was the official hero, like Pavlik Morozov, and then for many years a symbol of meanness, squealing and rabid anti-Semitism.

What was Lydia Fedoseyevna Timashuk? Whether its letter pushed an avalanche?

Lydia Timashuk worked in the Moscow polyclinic Lecanora of the Kremlin (later 4th Central Board of the Ministry of health of the USSR) from the mid 1920-ies and at the time of the events there was the head of the functional diagnostics office.

It took an electrocardiogram from suffering from shortness of breath and pain in the heart of Zhdanov and came to the conclusion that he had a hidden heart attack. 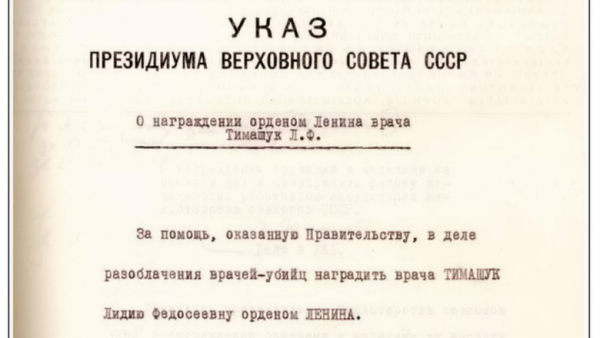 Famous cardiology Professor Vinogradov, Vasilenko, regularly observing the patient, her diagnosis did not agree, found that there is a worsening of ischemia, and ordered the patient to rest in a sanatorium at the Valday and long walks, which in the case of a heart attack doing just should not be.

Timashuk (according to his colleagues, not without reason) proud of their experience and qualifications and believed that the Professor, of course, the light but in a narrow reading of cardiogram it should hear.

The prevailing opinion of those who outrank you.

In our days, by acclaimed Russian and Israeli doctors headed by Professor Theodore Lascom has reviewed the ECG, and concluded that a clear pattern she showed. Can be judged, and so and so. There was a medical error.

Corporate ethics dictates in such cases it is possible to “shield” colleagues. Timashuk was at the meeting and in private conversations to emphasize that blew her off, and she was right. As a result, 7 Sep her from office by subcabinet capital clinic was transferred to an ordinary doctor in a sanatorium near Moscow.

“Having suffered for criticism”, Timashuk received as many Soviet citizens in her position — has complained to the Central Committee.

Nikita Khrushchev, and after him many authors have called her a collaborator of state security. No evidence of this. If she was an informer, probably, would carry on and Vinogradov, Vasilenko for the KGB line, and did not send it by regular mail.

It should also be reminded of the “doctors-wreckers”. In fact, no “case” was not the statement of doctor Timashuk, who may be under the influence of someone or at the direction of (because it was an unofficial employee of the state security) wrote a letter to Stalin, in which he claimed that the doctors used improper methods of treatment.Nikita Hrushevs report of the XX Congress of the CPSU “On the personality cult and its consequences”

Political accusations against the professors she’s not nominated, by the Jews, they were not. It was a professional dispute, obviously, coupled with character traits.

“He has forbidden wine and beer”

Oversaw Leckner Secretary of the Central Committee Alexey Kuznetsov, Minister of state security Viktor Abakumov read the document, interesting have not seen, decided that the intricacies of medical experts need to understand, and sent the paper to the chief of Lecanora Peter yogorov.

He came to the defense of eminent colleagues and put the letter under the carpet. Two more appeals Timashuk in the name of Kuznetsova went to the archive without review, received from as a known constant of the Complainant.