As Lavrov commented on the mass expulsion of Russian diplomats

The Russian foreign Minister Sergei Lavrov said that after the incident with the poisoning of the former GRU Colonel Sergei Skripal and his daughter Julia in Salisbury, the British authorities were able to persuade European countries to send their diplomats from Russia, despite the fact that London has begun the procedure of exit from the EU. Lavrov also praised the ability of British diplomats to manipulate their partners and “skip ahead those who can carry their own dirty work”. 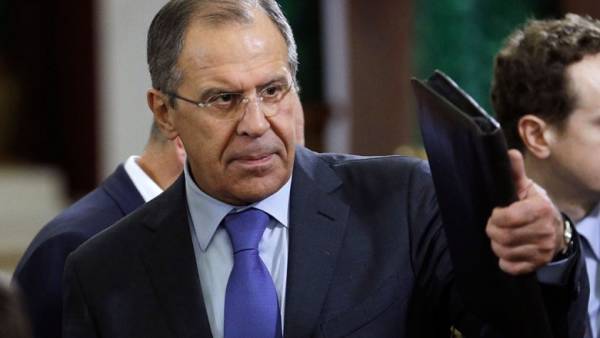 The British authorities were able to persuade the EU countries to expel their diplomats from Russia in the framework of “business Skripal”, despite the fact that the UK leaves the EU. This was stated by the Minister of foreign Affairs of Russia Sergey Lavrov.

“I sincerely tip my hat to the British diplomats, which in the period when the country goes away completely from the EU, manage to influence EU policy towards Russia, and of the US too”, — said Lavrov in his speech to the students of the University.

He recalled that immediately after the incident in Salisbury “the European Union reacted quite cautiously,” but London has managed to “persuade two-thirds of the EU to send one, two or three Russian diplomats after the British”.

According to him, European partners in response to the question of the Russian diplomats said that the British did not show them any evidence of the involvement of the Russian Federation to the poisoning Skrypalia “beyond what they publicly say.” The EU promised to provide the evidence later, said Lavrov.

“I’m asking — still nobody nobody presented,” he said.

The Minister also said that the British diplomats managed to get the US “to run ahead of London.” He commented on another anti-Russian sanctions that Washington imposed in connection with the “business Skripal”.

“I think this shows the skill of British diplomacy to persuade and skip ahead of those who can take on the dirty work,” — said Lavrov.

The strained Russian-British relations he called “sad story”. At the same time, says Lavrov, Russia “with Britain nothing connects such irreparable”.

Former GRU officer Sergey Skripal and his daughter Julia was poisoned in the English city of Salisbury on 4 March. London believes that the poisoning Skrobala substance A234 involved Russia. Moscow categorically denies it, paying attention to what still was not provided with any evidence of such charges.

Official representative of the Russian foreign Ministry Maria Zakharova said that the case Skrobala in the foreign office was sent to about 60 diplomatic notes with the requirement to provide Russia access to the investigation and to affected citizens and also with the request on legal assistance and cooperation proposals, including joint investigation, but the British authorities did not respond to them.

In poisoning Russia Skripal was accused, in particular, Prime Minister Theresa may and former British foreign Secretary Boris Johnson, who argued that the evidence of guilt of Moscow “staggering”. However, later the head of the secret laboratory of the British Ministry of defense said that the experts were unable to establish the origin of the substance, which was poisoned Skrypali.

However, due to the fact that Moscow allegedly used chemical weapons, UK and solidarity with her country this spring sent a total of 153 Russian diplomat.

First this step went to London, sending 23 employees of the Russian Embassy. The United States has removed 60 Russian diplomats and closed the Russian Consulate in Seattle. France, Germany, Poland and Canada expelled 4 us diplomats.

The head of the foreign Ministry of Canada Chrystia Freeland said that “all four were identified as members of intelligence services or the person who used diplomatic status to undermine the security of Canada or to interfere in our democracy.”

The Italian foreign Ministry announced the expulsion “of two employees of the Russian Embassy in Rome.”